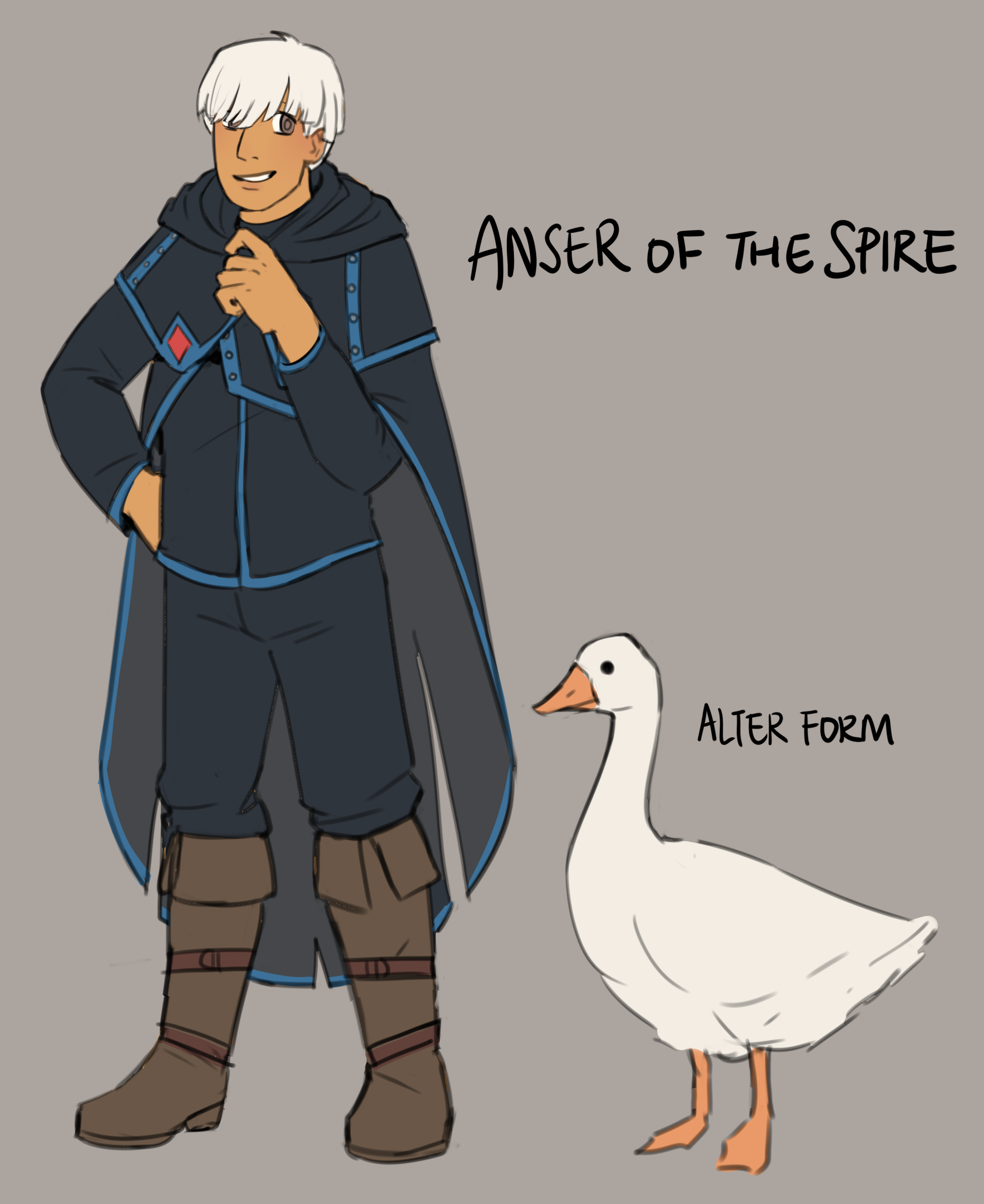 A character from my web novel, Revolving Door! The avatar is a placeholder.
Personality

For one who grew up in the mountains, Anser is astonishingly clumsy. You might catch him getting his cloak snagged on tree stumps, or sliding off his horse thanks to a poorly-fastened saddle. On observing him doing so, you might be inclined to shout, "you goose!" And you would be absolutely right, for he is a goose, and nothing delights him more than being called one.

What Anser lacks in conscientiousness, he makes up for in honest enthusiasm for his work, a willingness to do even the dirtiest of jobs so long as it is asked of him, and a confounding resistance to serious injury. Everyone in the Right Vanguard appreciates him, even the ones he's accidentally tripped into the tents of. His greatest appreciator is his commander, Curia.

When Anser walks into a room, he lights it up—and not because of his brilliant white hair. He has sweetness and sincerity in spades, winning others' trust without even having to speak. His innocent charm belies…nothing: he really is what he seems. He tends to say everything at once, and he tries to have a filter, but it is clearly full of holes. That's not to say he's intrusive: he often shies away from discussions too personal for his liking.

If there is one thing that grabs his goat, it is cruelty to the helpless, especially towards animals. Grabbing a goat would grab his goat. He would jump to others' defence on a dime, but confront him and one would find him absolutely thornless—and quite incapable of defending himself.

Born in a village halfway up the Spire—a mountain so tall it seemed to tower like a spire through the clouds—Anser knew all he did about the world beyond through stories. With parents employed by the world-renowned Archaeological Guild of the Spire (the cold, dry air preserves artifacts well), he inherited his family's sentimentality for history.

He was born, or so his parents told him, of a vision of a particular lake hidden in a forest, on which several geese swam, which they had seen on one of their missions. In his youth they regaled him with tales about the Queendom of Hearts on the other side of the Spire range, and of the new worlds uncovered by the century-old order of the Ducal Scouts, so that they filled his dreams and he came to wish to join them.

Anser planned to leave home to pursue those aspirations on his eighteenth birthday. But the mountain is a fickle beast, and that same week, several buildings in his village were crushed in an avalanche, including the archaeological catalogue. Reeling with the shock and grief, his parents and the rest of the guild immediately embarked on the task of rescuing their artifacts from under six feet of snow.

He volunteered his help, but half a year in, it became apparent that this endeavour would last at least a year more. Unwilling to hold him back any longer, his parents agreed to send him off.

He moved to the Duchy, which dealt in the Queendom's exploration and conquest, and offered his services to the Ducal Scouts where he was posted to the Right Vanguard. He grew on them instantaneously. Still a wide-eyed newcomer, he hasn't yet started to think about the motives and intentions of the Queendom in sending scouts there.