You Can't Fight The Homestuck

a homestuck based code that comes with Wikia v2 by watergems

A Boy Stands In His Bed Room

Your name is JOHN. As was previously mentioned it is your BIRTHDAY. A number of CAKES are scattered about your room. You have a variety of INTERESTS. You have a passion for REALLY TERRIBLE MOVIES. You like to program computers but you are NOT VERY GOOD AT IT. You have a fondness for PARANORMAL LORE, and are an aspiring AMATEUR MAGICIAN. You also like to play GAMES sometimes.

What will you do?

this will emulate layout of MSPAWiki 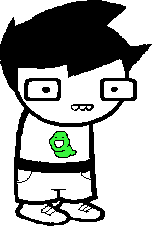 jeez.
i don't know. i...
i don't know if i'm ready for every single "deep" conversation we can squeeze into this wacky rapid fire session of fun pal-talk!

too lazy to list all of these too, sorry

John Egbert is one of the main characters in Homestuck. He is a boy who, according to this page, has not been given a name until his thirteenth birthday; however, this is just a framing mechanism. In the past, he has ended letters with -ghostyTrickster (john). While originally given the name "Zoosmell Pooplord", the game rejected it and settled for John.

John, travelling by meteor, arrived on Earth as an infant, which resulted in the death of his ectobiological mother. He was adopted and raised by his half-brother who took the role of his Dad. At some point during his childhood, Gamzee Makara used his chucklevoodoos on John, causing a doll resembling 3 x prototyped Jack Noir to appear in his dream room on Prospit. This caused John to write self-depreciating remarks and draw pictures of harlequins on his walls while sleeping, however he was not cognizant of these while awake. His dad, who was generally supportive of his interests, began showing an interest in harlequins too, in an attempt to bond with John, but failed to realize John's distaste for them.

At some point John became friends with Rose, Dave and Jade over the internet. Little is known about this other than Jade first contacted John on one of his birthdays. All four would go on to play Sburb together. On Jade's birthday, after being harassed by trolls, John changed his Pesterchum handle from ghostyTrickster to ectoBiologist.

John and his friends play a game. And then they scratch it.

He also has a strong propensity for self-described 'HILARIOUS ANTICS,' and has all of the points on his Prankster's Gambit. All of them. Although Rose and Dave both frequently take potshots at the quality of his jokes and pranks he appears to have a genuine talent for comedy, as his post-scratch self became a world-famous comedian.

John's physical appearance could be described as a kid with black messy hair, though it has been revealed that he gels it to look that way. He has an obvious nerdy look about him, a trait inherited from his ectobiological mother. His outfit has a picture of what appears to be Slimer from Ghostbusters but is in fact a Japanese knock-off.