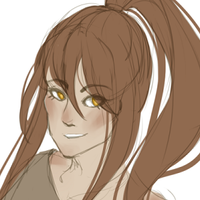 it's a secret (they/them)

Lucrece is a talented young biohacker who acts as the de-facto "computer person" for the Sharks. While they can be quite rude and lazy, they're better at coding and infiltrating corporate firewalls than most trained adults. Because of their age and relative physical frailty, they're not involved in any of the gang's raids or negotations, though they are saddled with the responsibility of keeping The Den clean. They have it a lot easier than other gang members their age, but that doesn't stop them from trying to pawn off their rather miniscule amount of work on others, much to Ilya's chagrin.

No one really knows what Lucrece's life was like before Ilya found them wandering the streets of Sector Gamma-Phi a year ago. They refuse to speak about their past, but members of the Sharks know that they have a large surgical scar on the back of their head.

Lucrece is a unique human-AI hybrid organism, composed of Sol (the human) and delta.exe (the AI). Their strange co-existence is the result of highly illegal human experimentations done on neuroplastic children.

Sol is a rather unremarkable human child. They were sold off to a shady research lab by their parents when they were quite young and doesn't remember much about their life prior to being inside.

delta.exe is an experimental AI created for the sole purpose of overriding and controlling a human's central nervous system. Prior to melding with Sol, delta.exe had killed many potential hosts due to their overaggressiveness and was on the verge of being decommissioned.

Sol and delta.exe managed to work out an acceptable co-existence deal out of their mutual fear of death and escaped the labs together. It's taken them quite a while to get used to inhabiting the same physical body, but they have integrated so well with each other that they act more like a single organism than two separate ones.

Likes Doing nothing / Hanging out with Dad

Staying warm / Having their hair brushed

Dislikes Being alone / "Are you a boy or a girl?"

Physical activity / Being told to do things

Lucrece had nothing, not even a pair of shoes, before Ilya found them rummaging through a pile of trash on the streets. He was the first person to show them any compassion, so Lucrece has gotten rather attached to him.

Lucrece considers Ilya their "dad," even if they're not biologically related. They may act really bratty whenever Ilya asks them to do chores or actual work, but they're very happy that he trusts them with important tasks and wants to make him proud.

Lucrece hacked Assassin and accidentally gave them free will during a desperate bid to save Ilya.

While Lucrece is somewhat scared of Assassin, they feel very bad for the android, knowing that they gave them the sentience to recognize their unfair place in the world. Lucrece is also very jealous Assassin's smooth, silky hair, but they know better than to say that out loud.

A highly advanced AI in charge of maintaining the elevators and broadcasting propaganda to the Undercity masses. Despite their nice facade, Lucrece knows Khyrin is crueler than they let on. delta.exe seems to be slightly jealous of them.