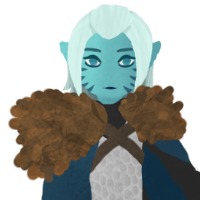 Water Genasi Druid. Not too familiar with the surface world. Currently adventuring in an archipelago, spends a lot of time on ships/near water. She has three traveling companions at the moment and isn't particularly fond of any of them. There's a blink dog pup that one of them has that she frequently fawns over though.

Her most iconic powers so far are turning into a dire wolf, shooting ice shards at enemies, and calling down lightning. Also summoning a sprite that resembles a baby sea turtle to heal her teammates.

Gotta keep this under wraps until others in the campaign learn this stuff but some simple things...

Sea Elf and Genie (in disguise) parents. Raised among sea elves who bribed their way into being protected by a dragon turtle.

Troublemaker child, hated people, spent a lot of time around the city's "guardian" or roaming the edges of their territory.

Temporarily banished to arctic waters at one point. She could have gone home after her "time out" ended, but she didn't. After years of isolation (only animals and the vast sea to keep her company) she started down the druid's path on her own.

Eventually, [redacted] gave her cause to venture up to the surface and begin her career as an adventurer. To others, her objective is unknown, she seems to just go where the moment takes her. Smarter folk might get the impression that she's waiting for something.

Here's the edited image I use for her game, note the braid, which I wasn't able to include in my art.