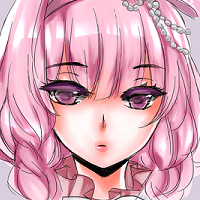 College Freshman (she's a semester behind Alma and Angele)

Early 2013, maybe? Somewhere around then. Wasn't named until early 2014 and wasn't soldified as a character until April 2014.

Bullies, dirt, asparagus, closed-minded people, places that just have stools and not chairs, homework, classes that grade for attendance, hangers that aren't plastic, bees, feeling lonely, the cold, watermelon (which is surprising given how pink it is).

Can identify any shade of pink by hex code.

Chalcedony is curious and not particularly difficult to become friends with. Most people assume she's cold and distant due to her monotone voice and deadpan mannerisms, but she's actually very outgoing and sociable if you stick with her. This mostly shows up online, where instead of being somewhat reserved she's self-centered and vain to an intentionally over-the-top extent, complete with snark and loads of memes. She's very open-minded and pushes through social boundaries without care, casually discussing like sex or violence without really reading the room. Though she tries to be a decent and likeable person, she has a hard time reading people's emotions and sometimes doesn't realize when she's going too far or making people uncomfortable.

Offline she tends to be quiet outside of friend groups, only opening up to people if they either connect with her other friends or make an effort to talk to her first. She likes people a lot, but she's a little paranoid due to past experiences. She also just doesn't like initiating anything in general, feeling more comfortable letting the world move around her and push her along even if it comes at the sacrifice of her agency and well-being. To make a long story short, she sees herself as a doll; she wants to look pretty for everyone and for others to treat her affectionately, and she's okay with being mistreated or broken since she feels more like an object than a person. She doesn't really want to be a person, anyway. It's hard, and it's so much easier to just not have to care about anything and exist only as something for temporary amusement. A lot of her mindset stems from mental illnesses (depression, autism, etc.), as well as a history of abuse and having grown up in an environment that didn't allow her to learn many coping skills.

She tends to make decisions very impulsively and almost seems afraid of thinking things through for too long. Because of this, she often finds herself in bad situations with bad people, but she'll brush off any such incidents and proceed with nonchalance. She can come off as self-destructive or just ignorant of the consequences of her own actions, but it's a little of column A and a little of column B. Chalcedony is extremely unmotivated and terrible at taking care of herself, and this plays into that. She doesn't see much of a future for herself as an independent adult, so she figures she might as well just do whatever she wants whenever she feels like it, even if she knows it's a bad idea. In the moment it's fun and/or rewarding, and maybe if she's lucky she'll end up dead, incapacitated enough that people will stop making her feel bad for being perpetually trapped in a haze of draining apathy, or pitied and taken in by someone who will take care of her.

Chalcedony doesn't like to talk about her family life or backstory in general, preferring to live in the present. She grew up in a household that didn't really know what to do with her and wasn't willing to help her. She had a number of siblings and was somewhere in the middle, so the older she got the more invisible she became in the face of her more outgoing younger siblings. She struggled to fit in at school and make friends, also doing poorly in studies due to an inability to focus and a lack of drive to become successful. She became involved with the internet, video games, and other media very early in life, finding such things unintimidating and comforting.

As she entered high school she became increasingly desperate to cling to her childhood, being driven further under her covers as her younger siblings started jumping over hurdles she was too afraid to even think about. Her parents accused her of being lazy and selfish, which only made the idea of growing older and continuing to exist more unappealing to her. Her family badgered her about acting like a little kid, made fun of her interests, expressed disappointment for her love of "childish" clothing, and continually pressured her to Just Get Up (tm) and miraculously turn her life around and be a responsible adult, all while lacking the patience to teach her life skills.

When it came to college, Chalcedony just applied to whatever places she found with complete disinterest in actually attending. She was accepted into a school that was far enough for her to need to live on-campus, which simultaneously filled her with fear and relief. She still had no idea how to take care of herself, but she knew (and her internet friends had repeatedly assured her) that she was never going to be able to figure anything out so long as she was living in a household that saw her as a hopeless burden.

Upon arriving on campus, Chalcedony settled in and connected with a girl who went there who she met online: Almandine Andesine. She and Alma wound up being roommates, and having someone she was familiar with and could relate to help her bring her online confidence into the offline world. She met Alma's girlfriend, Angele, as well, and as Chalcedony's support network grew, so too did her sense of security. She still had no idea what to do with her life, but at least she had other people she could suffer with.

However, early into her second semester of college something strange happened. Alma disappeared, and shortly afterward some sort of energy being broke into her dorm and requested her assistance in hiding from the Space Police. Xe introduced xemself as Monaz and expressed a willingness to aid Chalcedony in her studies and her search for Alma if she'd let xem possess her frilly outfits, effectively using the vibe of Chalcedony's soul to mask xyr own.

Needless to say, Chalcedony was a bit overwhelmed with all of these sudden developments. At the same time, however, she was excited. A whole new world of fantasy and impossibility had been opened to her... for all of her life she had been so displeased with the real world, but now she had the opportunity to thrust herself into the sort of adventures she spent years escaping into through games and anime. With a surprising amount of gusto and motivation, Chalcedony accepted Monaz's offer and teamed up with Angele to uncover the mystery of Alma's disappearance, eagerly jumping down the rabbit hole and winding her way into a cosmic game with implications far beyond her comprehension...

She's completely and utterly human. She has the special ability to always be tired, I guess? And she's apparently good at harboring souls??