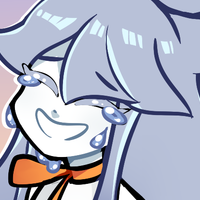 She doesn't remember when it even happened. She just started crying one day and the tears haven't stopped coming since. She cries so much, too much that she herself do not know if her crying is fake or real anymore. To her, it was a curse.

Her parents hid her from the world for the first 10 years of her life. She was quite lonely, only resorted to wandering around the house looking for things to do. That was why she came to love books so much. She read all kinds of books, and when she ran out, she'd start over with a book she had read again. Her mother, knowing they can't keep her inside like this forever, decided to let her go to school. Of course, the public's reactions were nothing of shock, some were even afraid of Lio, calling her an omen. Nevertheless, she was determined to do well in school, and soon rose to be one of the top students.

One day, a girl with long, bright hair approached Lio, declaring her to be her rival. That girl's name was Sunsee Luvoz, a popular girl at school. Lio was quite confused, as she didn't understand why there needed to be a rivalry between them, but since Sunsee was one of the first people to approach her, she happily accepted. Her reaction caught Sunsee off guard. And the so called "rivalry" between them started. Soon after that however, they came to be friends instead and hung out with each other quite a lot.

The more Lio grew, the more her beauty showed. Guys started flocking in to confess with her, which she always accept. But they only dated her for a week or two before growing annoyed of her constant crying, because it made them look bad. Despite Sunsee's fury toward this, Lio kept going out with guys, hoping one of them would accept her one day.

Lio got recruited to be a model when she was 15. An agency called her tears "Something out of this world.", she had not heard such words directed toward her her entire life, so she hastily accepted their offer.