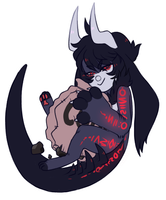 It's known fact that most Venos are well-intentioned with sweet dispositions, doing their best to work around their venomous spit... Caim has no problem being considered the callous, evil bastard he really is, and often invites others to provoke him into finding out just how far he'll take things.

He likes his space and he likes his autonomy-- so much that he's willing to override others in the process.
Though he won't admit it, this push-and-pull of interaction and solace probably stems from his painful adolescence, where he was sold into indentured servitude and treated horribly. This isn't to say he was ever an innocent, sweet lad...

He expects a lot and isn't patient enough to trust others to take care of his demands. There are times of rarity that Caim will let go of the reigns on his plans and allow others to 'prove' themselves (mostly lackeys), but it seems to be lackluster, needing his special touches. Not unlike a Bond-villain, he disposes of useless peons when they've made too many mistakes that he's caught.
Relying on others, to him, seemed like a futile effort every time, and even in his adulthood, he rarely sees the benefits others claim from it.

Even if he can be a huge jerk, sometimes his greed and pushiness is masked by a 'playful' demeanor. It can go 'too far' often where he keeps up the charade because it's fun for him to make someone look like a fool.
At the end of the day, all he wants to do is cause massive destruction just to feel something positive. Most of the time, that involves ruining other's lives and identities.