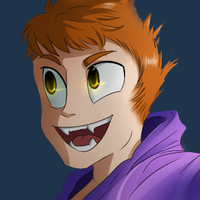 The werewolf of The Story and also Nathan's best friend. He appeared during the play in the beginning of Season 5 before becoming a main character in Chapter 24. He was the second to last character to be introduced (final main character- Gloria was a side character) and therefore didn't have much time to shine. I make up for this by requesting lots of art of him wherever I go.

Interested in drawing his wolf side? His werewolf form can be found here.

Alex is a lovable dork. While he might be quiet and distant around people he doesn't know, he's a total spaz around his friends. He's never too thrilled about being a werewolf, but over time he came to accept it and, while he still prefers to stay as human as possible, he doesn't mind turning and having some wolfy fun every now and then.

Alex is just your average guy who often has his head in the clouds. He can be forgetful sometimes; you have no idea how many times he's forgotten about the full moon. Other times he can just be found daydreaming or... actually dreaming. He's happiest when playing his guitar or playing video games.

He is very protective of his friends. He is more than capable of using his strength to help if someone close to him were to get into trouble. While he's not really the jealous type, he can get pretty annoyed when he sees one of his friends talking/hanging out with someone he doesn't really get along with. He believes that he has a "moral compass" (much like how dogs are believed to know who is good and who is bad) that lets him know who is an enemy and therefore whom everyone should avoid. While he is usually timid and docile, it's not uncommon for him to be fairly aggressive. If someone gets in his way or attempts to hurt anyone close to him, he will do whatever he can to stop them, even if it means he has to kill someone.

All in all, Alex is a lovable dork who has learned to accept the beast within and just wants to live as normal a life as possible.

For info on how he is as a werewolf, check out this page.

Alex is a trueblood werewolf. This means that he is much stronger than a normal werewolf and has the ability to turn others through biting.

He can transform into a both a werewolf and regular wolf at will, and usually has control of his actions. He can control himself during a full moon, though hasn't learned how to resist turning during one yet. Sometimes he might just start shifting out of nowhere in broad daylight, though it's very rare and might happen because he's nervous or stressed. He often sticks to half turning (fangs, claws, sideburns, ect) since it's easier on both his body and his wardrobe. Unlike a lot of the art I have of him, he doesn't have a tail or wolf ears when he partial shifts. His ears become pointed but nothing close to that, most people just tend to draw him that way.

While he isn't seen too often, Alex can often be found hanging around Nathan. Other times he's being a dork or asking if he could eat something meat-related. He's so adorable in The Story it's not even funny. He got the chance to narrate once and wow was that a trip. He had no idea what he was doing and called everyone by different names resulting in everyone hating him for a while. He was a bit more shy in The Story but he's "evolved" since then.

Being a late edition, he doesn't really know many of the other characters (he called Zack "Dennis" for a good chunk of the Season). He's BFFs with Nathan, has an ex vibe with Sindr, and is madly in love with Lily, though he's way too shy to actually tell her how he feels. It's actually cute to watch him go up to her and just like totally garble everything he says.

He and Nathan have the biggest bromance on the planet. They are unseperable and consider the other as a brother. While most people might be terrified of a werewolf, Nathan thinks it's the coolest thing ever... that and the fact that he knows Alex is the biggest non-monster on the planet, thus ensuring he would never hurt him. This is probably why they have such a strong bond- the trust is so strong. They spend most of their time hanging  out and Nathan is usually by his side during a full moon. Nathan often teases him by calling him fluffy and adorable (which is totally true) and he doesn't really like it. He knows Nathan will never stop though, so he kinda just puts up with it.

He hates more things than you'd think. Bugs and rain, to name a couple. He also hates being in confined spaces or being "locked in" and might turn if he is left trapped for too long. Loves to skateboard and play his guitar.

Wears a purple-stripe hoodie over a grey t-shirt with jeans and random shoes. You're free to change most of his outfit, the only thing that's unique to him is his hoodie. He can wear other clothes though, I love when people give him other outfits. It's not seen much, but he also has a tattoo on his right shoulder that extends down his arm but would be hidden by short sleeves (a small part of it may be visible).

He has ruined a lot of clothes due to his bad habit of forgetting to undress before shifting.

ALSO HE SHOULD NOT BE DRAWN WITH WOLF EARS/FANGS/CLAWS/TAIL/ETC UNLESS OTHERWISE STATED!