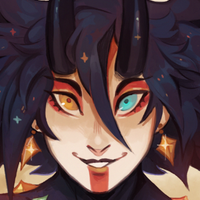 finally working on this guy's design so expect more as i finalize the details. theres a few things i wanna change,,,,,

- add golden claws to armored hand
- add more diamond patterns to diamond arm and a few on the body + switch diamonds to "twinkle" shapes instead?
- golden plate leggings
- weapon is a spear with a diamond motif and similar spikes to the armor. spikes are the standard for angel spears.
- no back wings by default but they'd probably be all black with faded accents and gold armor along the top/back?
- full outfit gonna be skimpy cuz im all about that life. its fine...angels dont need proper armor

FALLEN ANGEL who is an edgy anti hero sort. lawful neutral. ate some sand once and is angry about it.

he is the APRIL celestial but has not unlocked his true form now that he is fallen. but maybe he'd get a cool fallen form. it would be based off ARIES. he is a counterpart to september and was bested by them in battle.

he talks like this "i has't cometh hither to consume sand and dig mine own way to hell" and it's the worst!