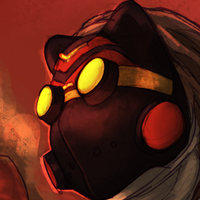 Rogue is linked to many mysterious deaths in Aunar: the victims aren't recognised by a single person on the planet, were all discovered to be doing scientific work, and lived hidden from the rest of the planet. However, nobody is aware of Rogue's existence. Nobody knows it was him. He believes his work as just, as he thinks that the odd scientists are going to create some great destruction.

Dislikes: not the scientists, obviously

Currently lives in the Grimrane peaks, mountains in Andto

Originally from The Scraps