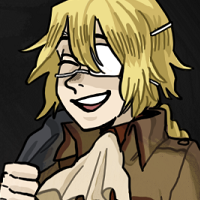 They're dead!! Probably around their 40s upon death??

*points at langer, khazael, laplata, and zhirael* All of them

Being alone or otherwise just feeling lonely, having to stay in one place, seeing people cry, scaring people away, being woken up for something that's not even exciting, hurting their hands (anywhere else is fine, but they need those for a lot of things!), green beans, having to part with sweet loot, cloudy days (no sun, no rain... what's the point?), anything that's too new or pristine, being bored, cold water (even for drinking).

Cats, bats, rats, wow i did not intend this rhyming actually but it's what they would've wanted

Ouray is extraordinarily carefree and doesn't seem to take anything seriously. They care little for societal norms and never bother reading the tone of the room, though it's argued that they just have an inability to grasp such concepts rather than them ignoring them out of spite. Ouray is generally a kind and friendly person who just can't read between the lines and has a poor understanding of the consequences of their actions.

Ouray has an overwhelmingly adventurous spirit and is never satisfied sitting still unless they're in exciting company. They're attracted to trouble and danger and fail to understand why others aren't. They'll merrily risk life and limb just to have a good time, staying in good spirits even if they found themself crashing right into their deathbed. They're known for their dark sense of humor, perpetually making puns and other quips when faced with certain doom. When people take offense to this they become confused and a little hurt, never really sure what they did wrong. I mean, lightening the mood is supposed to make things better, right?

Having been essentially raised by a demonic entity, it's no surprise that Ouray's moral code is... lacking. They're no friend to the law, but at the same time they don't side with criminals and have limits to the sorts of people they're willing to screw over through their antics. They're very loyal to those they consider to be friends, though in their mind a "friend" is just someone who puts up with their... interesting personality. They don't seem to ever feel guilt, and if they do it doesn't last for very long. On the other hand, though, they generally avoid doing things that are so severe that they would be expected to feel guilt for a considerable amount of time afterward.

Ouray was set up for a life of misfortune very quickly. They were born to a prostitute and an unknown father, and their mother was part of a cursed bloodline. Indeed, the moment Ouray was born their mother unwittingly passed down the demon that had previously been sealed within her flesh. This demon, Khazael, wasted no time in adjusting Ouray's body to their liking and settling in.

Ouray's mother died while they were still figuring how to walk without falling over, leaving them alone with only Khazael to help them survive. Having no other options, Khazael spent the next several years almost entirely possessing their meal ticket, doing whatever they could to rush Ouray to a stage of development where they could mostly fend for themself because MAN being stuck controlling a useless baby totally blows.

Knowing no better world, Ouray grew up fairly well-adjusted for someone who was an orphan and only made it past childhood thanks to the demon forced to inhabit their body. Of course, they wound up with very relaxed morals as well, needing to engage in thievery and squatting in order to survive. Khazael thoroughly encouraged and enabled this, and before long Ouray found themself stealing things they didn't need. It wasn't even to get some spare money or save up for a better life; they just enjoyed the adrenaline rush and the adventure. They traveled across the world, evading law enforcement wherever they went and thoroughly disabling any opposition with Khazael's aid.

As a teenager Ouray ran into Langer Raton, who they quickly became friends with. Langer was a fellow orphan and thief, and while he was a little softer and had stronger morals, he was still someone who lived for adventure. They partnered up and started traveling the world together, hunting for treasure, becoming unofficial bounty hunters, and every once in a while helping to bring justice to those that Heaven - the law - turned a blind eye to.

As the two became more known, Khazael suggested that they consider taking their business into Hell. With Khazael around with their immense power, they could totally handle stealing rare artifacts from lower demons in the outer areas of Hell. Plus, no one on the mortal plane would get mad at them for stealing from demons! Langer and Ouray thought that this was a pretty rad idea and immediately started scouring the planet for secret entrances into Hell.

Upon beginning their excursions into Hell, Ouray and Langer found themselves becoming more interested in adventuring than thievery. Humans were forbidden to enter Hell, and those who did regardless either came back scarred and without a soul or didn't come back at all. As such, information about Hell itself was limited. There weren't maps, historical documents, anything at all, even though from what the two could tell Hell had a vibrant community and a rich history. They took it upon themselves to start mapping things out and writing down journal entries about the various places they found, hoping to someday have enough information to publish, drawing in more adventurers to join them in the fun.

As they began traversing deeper and deeper into Hell, they ran into Demon Lord Zhirael - one of Hell's most feared residents, infamous for his obsession with eyes and his willingness to accept them over souls for contracts. Despite the obvious danger inherent in breaking into the home of a powerful Demon Lord, his property was so full of riches and all sorts of documentation about Hell's culture and past that Ouray and Langer couldn't keep themselves away. Shockingly, this turned out to be a terrible idea that would have led to their deaths (or, at least Langer's) if Zhirael hadn't found himself thoroughly captivated by Langer's apparently gorgeous eyes. They managed to escape with their lives, and a while later they ran into a woman named LaPlata Costina. She seemed a bit out-of-place in the adventuring world but expressed interest in staying by Langer and Ouray's side. It didn't take long for her to become a true part of the crew, even daring to enter Hell with them despite her initial hesitance.

Eventually they decided to go back to Zhirael's place, despite their risky initial venture. There was just too much stuff there to not try again! And so they did time and time again, sometimes managing to take things and oftentimes bringing things like books back when they were done of them. As time went on the group started treating Zhirael more like a Saturday morning cartoon villain than an actual threat, and though he wouldn't admit it the group was beginning to grow on Zhirael. Ouray even decided to give up their own eye to Zhirael, partially because it sounded fun but also because they totally wanted to keep enabling Zhirael's fixation on Langer; Ouray used their wish to make it so that if Langer ever did let Zhirael have one of his eyes, it would be painless.

The next years, despite being eventful, were overall peaceful: Langer and LaPlata started dating, LaPlata revealed herself to be an angel who was getting to know humanity, Zhirael softened and started offering up information about Hell without the threat of murder or soul-eating (usually), and Langer eventually let Zhirael take one of his eyes in exchange for one of his own as a sign of friendship. They all continued their adventures together, and everything was looking up!

And then came the day Ouray and Khazael witnessed Langer being spirited away by an angel, never to be seen again. They immediately alerted LaPlata and Zhirael, but despite their best efforts they couldn't find any sign of him. When LaPlata confronted Heaven about Langer's disappearance - certain that the Higher Angels took him to force LaPlata to remember her place was Heaven, not among humans - she was stripped of her status as a Higher Angel and kicked out of Heaven, sending LaPlata into a deep depression and limiting their chances of ever finding Langer again.

LaPlata clung to Ouray for comfort and consolation, and though Ouray knew that wasn't a healthy foundation for a relationship, without Langer they were feeling just as lonely. He had been their closest friend for so long and was their only human one, the only normal person who really accepted them for all of their quirks (not even counting Khazael) and earnestly enjoyed their company. Without Langer around to be their anchor, their straight man, and just their partner... it started to affect them more than they ever assumed it would.

Ouray and LaPlata wound up having several children together, despite their relationship being almost entirely based on reminiscing. Ouray asked Khazael to leave them and move on to one of their children, no longer finding any appeal in the extended life that Khazael's presence offered them. Khazael reluctantly listened to them, knowing what this meant for Ouray's mindset but wanting to respect their wishes. With their body having been reliant on Khazael's existence for their entire life, once Khazael entered a different body it didn't take long for Ouray to fall seriously ill.

On their deathbed, Ouray asked for Zhirael. Upon his arrival Ouray asked that he take their soul, and in exchange bar their soul from Heaven, Hell, and returning to Zhirael. They expressed a tiredness for this world, and hoped that if their soul couldn't go anywhere it was supposed to that it would wind up somewhere far away, somewhere new. Zhirael accepted, and once Ouray died there was no sign of their soul on any of the three planes.

Though their friends had no way of telling what had happened to them, Ouray's contract booted their soul off of the planet entirely, which defaulted it into entering Entirety's over-arching reincarnation cycle. They reincarnated into a disgruntled vampire named Cosimo Gualtier and then into a depressed young girl named Dianthe Katriel before finally reincarnating into their current life: Dicro Corrune.

yeah that's right all of this backstory and all of these details are just for some asshole who's canonically dead and got reincarnated into an entirely different oc. they barely even count as an asthenopia character bc asthenopia takes place like 200 years after they died so they're pretty much just a backstory npc for various characters

i love them though... rest in peas my friend

When Ouray was alive, Khazael was essentially fused to them, allowing them to cooperate to utilize Khazael's innumerable horrifying demonic abilities.

Without Khazael, however, Ouray is a completely normal human with no special powers. They are, however, a talented archer and excel with all sorts of ranged weapons. Of course, after they gave their eye to Zhirael, their depth perception took a pretty massive hit... that wasn't an issue with Khazael around to assist them, but in a theoretical world where they would still be alive, even all of their talent wouldn't be able to totally make up for their single eye.