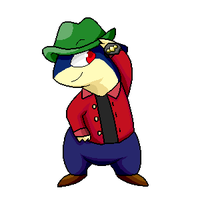 *not written via any letters in human languages*

Spiders, Pain, Spicy Foods, People that can be perceived as "Stupid"

It's not every day a higher being loses absolutely everything that makes them so through misplaced focus. Apparently, in every version of reality to exist, Earth (Sector ZZ9 Plural Zα) is meant to be the primary focus, as Earthlings' belief in said higher power is what keeps them in said position, and few other planets matter. This was found out the hard way by "Quilman", who got so wrapped up in maintaining another, much more bizarre, world that the inhabitants of Earth never knew their creator, coming to the conclusion that one never existed, and basically wiping him from existence. Since it had never happened before, the other high dieties decided to keep him alive in at least one member of the "pantheon" to never forget the lesson. This has manifested as living different life cycles from one reality to the next...Earth-238 "Aka: Boring Earth" is the current reality, and no one has any reason to believe any of the unusual memories he has.

The second, potentially most-notable, life cycle was under the care of Arceus, and this "Pokemon" form is typically the first taken under stress, and the easiest to change to, as needed.