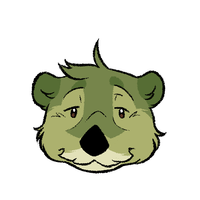 Riley's backstory could be a full-blown story in of itself. In his early 20s (so some 40 years prior to the start of the main plot), he moved to The City to pursue his paintings, finding himself right in the middle of the explosion of interest in what'd become known as the Pompier movement (though of course, no one involved actually went by that).

Despite his outrageous style of dress, outspoken personality, and open homosexuality, Riley actually found himself one of the most successful out of the scene thanks to merging the style's medium bending, making paintings spill out into the room or physically damaging and aging them to match their surroundings, with more traditional nature scenes and Americana. It also brought conflict, as the scene's more ardent followers accused him of selling out the more experimental nature of turning the real world into art by bringing it back into fantasy. Or something.

In response, Riley fled for the outskirts of The City Metropolitan Area, buying out an abandoned, run down manor at the edge of the Valley Cascadia with plans to turn it into a gallery and studio for himself. Imagine his surprise when the manor seemed to be healing on its own somehow! Even stranger is when his longtime partner Giulio responded to one of his flyers for exhibitions, barely speaking a word of English but somehow finding his way right to him. In time, he's learned not to question it. The building's got magical properties (or someone watching over it, perhaps).

These days, Riley is a much calmer, satisfied soul. He spends the vast majority of his time painting (of course), fishing (of course), either with Giulio or his recent apprentice Colton in tow, or tending to his plants, which are absolutely everywhere scattered around the Art Gallery and run down the walls like ivy. He's incredibly difficult to anger, a calm voice in a house where Giulio's drama and Colton's teen angst occasionally reign supreme.