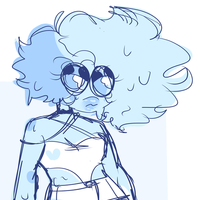 One of the ships clothing provisioners, i.e. Runs a clothing store, which she has called "Hot Topic". Refers to herself as a Spaghettification Goth, because black holes are darker than space. For always wearing white, she doesn't sell white things in her store. If you special order somthing in white she WILL grumble, but comply. As she was demoted from Ship Engineer by Counselor Grerbe when the latter's sleep pod malfunctioned (and being the first to find Grerbe who had just experienced the black terror of a Short Jump, untrained and awake).

At 163 centimeters tall in bipedal form, she's either been through a lot or one of the few among the slimes that cares about the average human size.

Ken'di appears in A Study of Hummas.