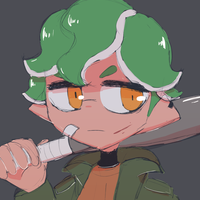 Jason is a cold-hearted, emotionless guy. No one really knows much about him.

His mother was considered as a psycopath and was sent to prison for the murder of her husband after she discovered she was cheating on him. Jason was 5 at the time of the murders and was sent to his uncle, which was a mistake since they later found out he was very abusive towards Jason. Jason was doing well in school but was part of the delinquents, going out on the streets stealing and beating up people for money.

As he grew older he now works in an organization that does shady business and is an expert in stealth and combat, is currently taking care of one girl as part of his job that he will protect with his life and works with his annoying partner. With them he starts learning simple stuff like feelings but also uses his partner to do his own dirty work

Jason has a lot of  issues like panic attacks, insomnia, extreme nightmares and depression.  He hates what he has to do, he wants to quit doing these things to people but he also finds an enjoyment from it, in a sick and twisted way. He mostly blames his attitude from her mother and wishes he was never born. All he really does to calm down is light a cigarette and pray for the best, he is very quiet and a smartass who cooks really well surprisingly and does the cleaning in his apartment. Still goes out with his partner to do dirty work or works at Grizzco as a manager.