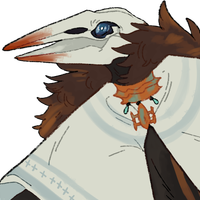 Dim tundra springs into noise. Clattering, rhythmic clattering, rings across the dead plains of snow, early in the morning. One might think this a sign of life, but no, it is simply life in death. The great dead whales, so often stained when their own blood when they breathe their last, heavy sigh upon meeting the unforgiving soil, awaken again. Their sighing turns into a whirlwind of bones. The deaths of the fox gives this clattering whirlwind a bloodied banner with which to signal its presence with. And the bloated deer, so decayed on top, is preserved under the frost, its legs used to pirouette on the same ice that doomed it. This noise is not a sign of life, but a sign that death will not stand to be forgotten.

They are a necromancer. However, they are the disembodied spirit of a necromancer from time past. They are the subject of various myths and legends from local tribes around the tundra. While the details vary from tribe to tribe, one thing rings true. They are a harbinger of death. They were a very powerful necromancer in a tribe now deceased. They dabbled in dark magic and wrong the spirits of the tundra. They sacrificed their entire tribe's bloodline for power.  But of course the dark powers are never satisfied. They took the necromancer's life as well. The spirits of the tundra deemed the soul unworthy, and doomed it to haunt the tundra till the end of time. The soul is at rest in the bottom of the ocean for most of the year, but at a very specific time of the season is comes out, puts on its regalia, and dances around the tundra. It is said that if you're unfortunate enough to see it dancing, you are the next to die.