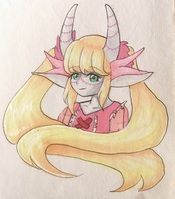 "Climb to the top, don't stop, make it pop, and continue to glory!"

Olivia was born and raised in the Greed region, having lived in Grabben City all her life. She was given this particular name because her parents were reminded of some sort of game from the above and living world, something about being sweet. She is...far from overly sweet. She can be nice sometimes, yes, but she knows how to manipulate to get to the top and she's worked her way to become the idol she was now. She's rather popular, in her opinion, and she's loving the fact that even a native born in the "city of dreams" has gotten to the top like this. Being an idol was no easy feat, she had to start singing and recording her own songs before she even got recognition, and then she worked harder and harder to better herself and become known well enough that people started scouting her. Unfortunately the fame got to her head and she cut off ties with her less than successful parents, not even knowing if they moved or died or what. But she's enjoying her fame and hosts rather epic parties at her mansion. She just...hates the fact that some people have boobs while she doesn't. That's totally not fair, she wants the perfect image for her body but the lack of boobs and butts is ruining it! Hmph!

She's a bit self-centered and definitely very, very greedy, always wanting more money and to be the best idol ever. She's gone on tours several times around Limbo because of it and quite frankly, she views some places worse than others coughheresyregioncough. She also has a persona she displays to the public, a sweet, kind, and caring girl that gives to charities and whatnot. Blech. Though to be honest, the little portion of her wealth she does give to charities has fans eating it up, so that's a plus. She's never known what it's like to be poor and she's never known what it's like to really suffer. So she's a very spoiled brat without the persona and only her maids and butlers and other servants know about this. Still, she is rather curious about people who are genuinely kind just because and she...wants to know why they're like that. Everyone has a public face and a secret, hidden dark side, right? So why are people good? She wants to know and is willing to be with a person just to get to know that kind side.

In fact, she's dating one right now. On her tour across Limbo, she stopped in Emankor and was wandering around when she noticed a curious little stall that people were gathering at. What was surprising was not the Implings, but all the different kinds of food the person had and apparently the stall was its own kitchen too. How curious! She ordered something outlandish, thinking the War Paint Demon wouldn't be able to serve it. He...kinda did? And it was presented well and was delicious to boot? But still, to work in such a tiny, cramped area and out in the open when he could open a respectable restaurant! She offered him to be a cook for her, but he declined saying he wanted to serve for the people and whoever was hungry, in case they needed a good meal. That was...also surprising. Stalking Scouting the area after her shows and all led her to finding out the young man's name was Carakante and he was genuinely a kind soul. He gave food to people at a low price and those that couldn't afford were given food for free and it just boggled her mind he was being so nice. So she made herself known after several excursions, always ordering something different and finding that his cooking knew no bounds, and they gradually got to know each other. He really was a sweetheart and she got to know what he was like quite well, his genuine kindness so befuddling that she just wanted to know more. She eventually let slip her real personality every now and then, but he took it in stride and remained by her side, much to her confusion. Eventually her tour took her to other places and back home and he didn't follow her, a sad thing but they were able to keep in contact. The long distance relationship was not what she was expecting, but she took it in stride nonetheless and often calls him whenever she can, having given him a phone and computer among other things.