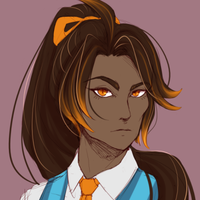 A human neuromancer in the Uppercity whose research focuses on the creation of novel AIs. He was mainly unknown in the neuromancy research community until he created DRAGONSONG.exe, a highly advanced AI with the capacity to independently emulate human behavior without prior programming.

A human neuromancer in the Uppercity whose research focuses on the creation of novel AIs. He seemingly rose to prominence overnight, after a round of endorsements by various megacorporation CEOs. He currently works for ██████ on Project ██████████.

Some would point to Synclair as an example of the warped ethics of the artificial lifeform industry. He views androids and AIs as disposable products and will think nothing of terminating them when they’re no longer useful, despite their possible sentience.

While Synclair has the qualifications to work with androids, he has sworn off android-based jobs ever since his fiancé was murdered by the assassin-type android known as C-S1L. He has created one android, though it’s a secret he’ll take to the grave. After all, human resurrection via technological means is quite illegal...

Synclair had never loved someone like he did Valentin, and the fear of losing that love blinded him to the horrors he had committed in his desperation.

Still, he does not regret creating "Valentin" from the corpse of his beloved, even if it has resulted their disappearance from his life.

Honestly quite an annoying individual, but sweet when they're not being a nosy drama queen. Deep down inside, Synclair is quite concerned with making sure that Khyrin can outlive him.