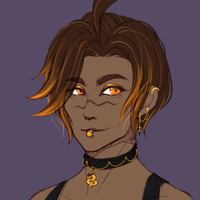 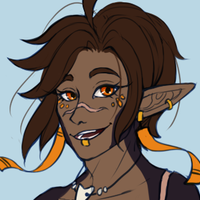 Sydney left their home shoal at a young age in the hopes of starting their own shoal. They had all the skills a successful shoal leader needed – the charisma, the personality, and the physical prowess – but their downfall would be their warmbloodedness.

Warmbloods are the top predators of the ocean, able to catch their own body weight in fish in a day. Normally that would be a positive trait, but many coldbloods view warmbloods with suspicion, usually out of fear that they too would be hunted should the food supply ran short. As such, most warmbloods live in warm-blooded shoals and only interact with other warmblood shoals. During their first few years on their own, Sydney was tolerated at best and detested at worst. Still, they trudged on, undeterred by the negativity they encountered.

While spending a winter in the tropics, Sydney stumbled upon a fabled lagoon of butterfly koi. They made friends with a young koi named Cecil, though they only met under the cover of darkness so the other koi wouldn’t chase Sydney away. Soon, they began courting Cecil, bringing them gifts of fish and glimmering stones.

One night, they underestimated their own size and ended up beached on a shallow part of the lagoon. Cecil tried to push them free, but they were too large for a mer of Cecil’s size to move alone. As night turned into day, the pair were discovered by the waking koi shoals.

The butterfly koi freed Sydney from the beach, but expelled them from the lagoon. Sydney lingered in the area for a while longer, hoping for one last glance of their almost-mate. As they was about to leave, Cecil came speeding out of the lagoon to join them. Though their own little shoal has expanded in size, Sydney still dotes on Cecil and brings them all sorts of gifts.

A beautiful and sassy koi who had lived suffocating life in an isolated lagoon before Sydney whisked them away and showed them the vastness of the great blue seas... or so Sydney likes to say. Cecil hasn't bothered correct them. Sydney would do anything for Cecil, including fighting a human.

A tiny yet curious koi shoaling, who is already a big troublemaker at a young age. Shoal Circadia's first and only shoaling, whom Sydney loves very much. They are way too lenient towards Lucrece, often accomodating their more ridiculous requests, much to Cecil's chagrin.

A lonely sea dragon mer who is far from where he should be. Sydney has known Frederick for many years, ever since the sea dragon washed up at the Fjords. They do what they can for the disabled mer, catching fish for him in the summers when Shoal Circadia is in the area, but they have their own family to take care of first.

A young mer who has had his family ripped away from him before he even became an adult. In the absence of his shoal, Sydney has taken it upon themself to serve as Kay's mentor in all things fish-catching. Unfortunately, their techniques don't really work as well for him, considering his smaller frame.