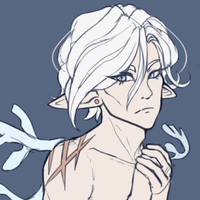 • Mollusks • Drifting around in the water • Boats + boat propellers • Other mer

Frederick’s home shoal consisted of many brightly colored tropical mer, all of whom were surprised when an albino leafy seadragon was born into their midst. Some had hoped that he would gain color as he aged, while others were less than optimistic. When it became evident that his white coloring was permanent, they abandoned him near the edge of a reef.

While tropical mer could survive on their own, their supbar swimming skills made it hard to catch fish, so it was much easier just to attract a mate who could do it for them instead. Unfortunately for Frederick, his albinism made it all but impossible. Vivid colors and unique patterns are the signature look of tropical mer, and absolutely necessary to become a shoalmate in a good shoal. As such, Frederick lived a difficult life alone on the edge of the reef.

His life only got harder after a current swept him out to the arctic fjords, where an accident with a fishing boat shredded many of his swimming fins. Now unable to leave the fjords, Frederick was forced to adapt to living year-long in the freezing waters. He scraped by on mollusks and crabs, but was constantly hungry.

Salvation came in the form of a giant orca mer named Sydney. Sydney showed up one day out of the blue and refused to leave him alone. At first, Frederick was reluctant to open up to another mer after such a long period of ostracization, but he eventually relented after Sydney’s (rather annoying) insistence.

After hearing his tale, Sydney began bringing him fish in exchange in for “renting” his territory. Frederick knew it was out of pity, but he appreciated Sydney’s tact in making it not seem like a simple handout. Like most mer, Sydney only spent summers in the fjords, but the sheer amount of fish he caught was enough to last Frederick through the grueling winter.

Sydney returned year after year, first by himself, and then with members of his growing shoal. Each year he would pay Frederick a fish rent for the duration of the summer, disappear for the winter, and return again at the next summer. Frederick was so accustomed to Sydney’s clockwork migration schedule that he had no extra food reserves when Shoal Circadia didn’t show up at their usual time this year.

In desperation, he ventured out of the calm waters of his “territory” to find a meal. He ended up beached on a remote shore and was resigned to his fate when a dry-lander came across him and carried him back to the ocean. This song-and-dance happened multiple times, mostly because he kept getting beached while looking for food, but also because he was kind of lonely.

Despite the lack of communication between them, Frederick began considering the dry-lander a friend. He was slightly confused when the dry-lander (he couldn’t quite pronounce his name) started bringing him food and gifts, as if to court him.

When Shoal Circadia finally arrived in the fjords for the summer, Frederick got Sydney (who for some reason spoke the language of the dry-landers) to act as an interpreter and a language teacher so he could finally communicate with his friend-and-maybe-mate-?. It’s going well so far. Kind of. Sydney is a very expensive interpreter, and Frederick doesn’t know where the dry-lander is getting the sheer amount of fish needed to pay him.

Frederick is surprised that a dry-lander like Lysandros would bother caring for an ugly, colorless mer like himself. While he would be happy to be a part of Lysandros's "shoal," he can't help but worry that Lysandros will leave him once a suitable dry-lander appears in his life.

An orca annoying mer that strongarmed his way into Frederick's life. A good friend despite his dramatics and surprisingly easy to talk with. Frederick may not say it, but truly appreciates what Sydney's friendship and all the things he's done for him.