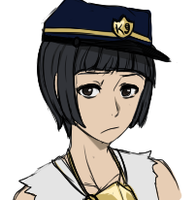 Behan is an young man with short stature and slim body who is allways followed by his dog, Mona. Due to his ability he wears thick gloves and boots to protection and a steel muzzle, which let him to attack with bites like dogs do. Sometimes he may wet the muzzle with pepper, poison, o other substances to provoke worse damage. He also wears a hat he won from Mona's past owner, a retired Policeman.

Born in United States, Behan had no control over his own ability, randomly swapping bodies with dogs and causing a fuss, obligating him to avoid the animals which he always had a passion for. He went to Japan looking for Fukuzawa's help and during his entrance test he met his canine patern, Mona, and her former owner. Once on the agency, even with better control of "A Dog's Mirror", the boy had complications working as a team with the other members due to his difficulty in trusting humans, which result in him doing mostly paperwork and helping Kunikida until Shomei joins.

During his free time, Behan will likely be at his dorm training his own body so it can be a better vessel for Mona during fights, but his lack of stamina will make him to fall sleeping soon. He sometimes visit alleys to feed stray dogs *BA DUM TS* with homemade food he prepare himself.

Ability Name: A Dog's Mirror
Reference: Your dog is your mirror

Behan's ability allows him to swap body with dogs as long as they make visual contact. It's unknow if there's a time limit, but the bodies must keep a distance no bigger than 100 meters between them, or the ability will lose it effect.

Body swapping is a scary experience for unwarned dogs, what may be dangerous for both the user and the animal, reason why he almost always only use "A Dog's Mirror" in Mona, a female German Shepheard who was formerly a Police Dog, hence have both combat and tracking training. In specific cases, Behan will carry a tiny Chihuahua named Onyx hidden under his hat. Onyx' small size allows him to enter pipes and other reduced spaces, also to easily hide from enemies, being of great usage for infiltration missions. Regardless of the size of a dog, it's courage and determination is the same, so once in their trainer's body, both Mona and Onyx have same fighting power (the bitch winning points due to her training).