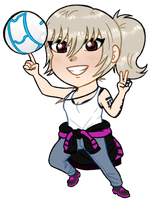 23 now hails from a strange planet that had enslaved humanity recently.
These alien bird-people amuse themselves with creating pantheons of entertainment-- they pit humans against one another in Olympic-esque games, enjoying the range of athleticism and drive this species can offer.

The game 23 is best at- and was guided to be the leader of a squad of- a sport similar to basketball (or perhaps closer resembling the ancient Mayan ballgame)...
She can rile up the crowd like no one else; having a bunch of cooing and crowing fans boosts team morale and shies away competition. This is to say, compared to most other unhappy, saddened competitors, 23 wins her team many games.
She's lost her team some games, of course, due to this sport not exactly human in nature but a close enough facsimile. But losers don't die or get punished or anything like that, so she takes each game as an opportunity to hone her skills rather than focus on the downsides of not having autonomy.

Being enslaved on this planet is much like a gilded cage... 23 is one of the few that seems satisfied with these life changes.

Twen is very sure of herself and her abilities-- this is made apparent by her loud, near-infuriating optimistic attitude! But she seems to have good reason in her actions/reactions; she'll be the first to admit with every positive outcome, there were several attempts that were less than great.
It's not all just bluster and charm with her... Though that isn't to say she's done her fair share of blundering into success and taking all the thunder where it isn't due.

She does seem to have the bad habit of hiding away those 'deep down' feelings to keep things afloat. Being a team leader has really put some responsibility in her bones, and she finds it as a good thing.

And, to fellow Human dismay, she is genuinely uncaring of the enslaved situation-- if only because the aliens seem to adore her, and she can't resist positive attention and encouragement.

► Twen came to me in a vivid dream... I couldn't let it go even upon waking. These days it's rare for me to remember dream details, so I just wanted to run with this!
► Their left arm is tattooed with their human identifiers; the bird-people can scan the identifier and pull up records of the human this way.
Photographic proof is not included-- however, those aliens do have it down to micro-science on the identity of who owns what tattoo. For instance, Twen's shows her height + weight fluctuations as well as her common diet, common hours of rest and leisure, common hang-outs, etc.
► She still remembers her birth/deadname, but since all of these records were lost upon Human enslavement, she felt she was better for it. She sees no need to waste time reminiscing and bringing that up...!
► Her necklace is actually a piece of a broken-off charm that an adoring fan made for her. Said fan is the most loudest and encouraging of their 'brood'!
The piece that broke off was a tooth off of a feral creature's skull-- a planet-side mammal that the bird-people hunt on rare occasion. Twen ironically considers the accidentally-broken-off piece as a token of good luck.