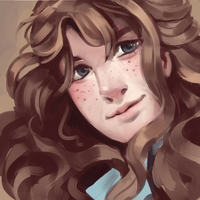 Born in the Queendom Citadel and living neck deep in academia for more than half her life, Mellistella weaves fact and conjecture from her daily observations as easily as exhaling. When it comes time to work, her focus sharpens to a needle-point, put to good use poking at reality and elucidating the laws underpinning all that is. She often forgets her meals when she's fifty lines into a mathematical proof.

When you know that much about everything's place in everything—particles in objects in space—you often come to see the rest of life as wispy and meaningless. But not Mellistella. For her it is a reminder that she gets to make whatever meaning she wishes to out of the speck of the universe that she has control over. This is why she fusses over the beautification of her wife Blackrain's manor house whenever she's there, placing a potted plant in a new spot every time.

Blackrain has control over a considerably larger speck of the universe than Melli does, which she makes it a point to remind her of, even if the Baroness seems to think she is half the worth of the Barony. The two are never apart whenever it can be helped, and unfortunately it often can't be helped, but they make the most of the time, reading old literature together.

She knows not everyone gets to be in the Baroness' good graces like she is, and she has become the outside world's point of contact with Blackrain—in whatever little time she has outside of her research.

Mellistella, genius from birth, was born in the Queendom Citadel—the Queen of Hearts' seat of power. With distant blood ties to the Queen, she was picked out from a young age to be a future researcher for Queendom, and spent a childhood and teenhood honing her mind and skills at the Queen's University.

While some of her classmates crashed out under the immense stress, and others were accused of stealing secret data and then beheaded on dubious grounds, Melli lasted it out on the force of her rapturous interest in metaphysics, and was granted her professorship at thirty-one by Queen Gertelina herself (well, via Merse, the Six of Hearts).

However she was clearly too good—that is, too dangerous—to be kept close to the throne, so she was sent to a satellite research centre in the Barony of Spades, where she would helm the team stationed there. She had no trouble gaining a reputation among the strange townsfolk once she was there, and eventually caught the attention of the strait-laced Baroness Blackrain herself.

Not that she was there knowingly to court her, but Blackrain has a type, and that type is incomprehensibly intelligent women. Soon, Melli found herself receiving a most hallowed invitation to the Baroness' own manor. They fell in love at the first crossing of verbal swords. It wasn't long before they were together in earnest, though Blackrain—normally so irrationally wrathful—was content to let her wife continue to work at the research centre as she had before, seeing her only once every five days.

Relationships
Facts
A note on theology

In Wonderland, theology means something different to what it does to us. To them, what we call "God"—which they refer to as the Light—is the ultimate will of the universe exerting itself, a force from which intelligent beings draw their own ability to change reality by will.

As poorly-comprehended as it is, it is thought of as a physical phenomenon due to the consistency and measurability of its effects—and thus the study of Theology is, in Wonderland, a branch of Physics, and the Light is examined through both observation and mathematical conjecture.

Just as we are unable to yet comprehend Dark Matter or derive a Theory of Everything, they have yet to derive the true nature of the Light.