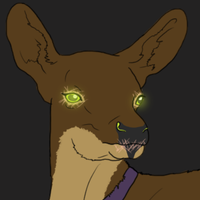 • The host of a virus with Ebola-like symptoms. She is basically programmed with the intent to infect everyone she comes in contact with. Infection occurs through mingling of bodily fluids, and is most often delivered through a bite, or sexual contact.

• Shape shifting capabilities. Her species is made to blend into the most predominant species of a world to remain undetected. Some characteristics remain, in Leodora's case, this is the bright green-yellow mucus membranes, eyes and tongue, the collar and cuffs, and all scars attained in her past.

• The collar cannot be removed, though it has been deactivated. It was once controlled by her creators, able to use chemicals and signals through her nervous system to completely control her body and thoughts. Also can deliver pain, as well as wipe or suppress memories and emotions. The cuffs serve a similar purpose. Each creature is also outfitted with a tracker in the skin of the abdomen, which Leodora has removed.

• Curious of others in all worlds she travels to, but doesn't remain long in their company usually.

• Can be very persuasive, through sexual means or otherwise, when she wants something.

• She's a very strong flirt, though her intentions are usually rather false. She doesn't seek out intimate company often, but will make exceptions for few who she feels are worthy.

• Comes off very intense, she's not very conscious of social barriers or personal space, and can be quite intimidating to more shy individuals.

• Takes joy in the pain of others, for the most part. She's been adapting to a slightly more remorseful way of life since deactivating her collar. Still quite aggressive and rough with both play and affection.

• Often struggles with herself, unsure of who she truly is. Unaware of her past before the experiments, unsure if she wants to continue the mission she was instilled with, despite the deactivation of her collar and removal of her tracker.

• Absolutely adores any gifts. Is very sentimental and cherishes anything given to her with good intentions.

• Will take most opportunities to cause harm to others, or pull pranks, steal food, etc.

• Struggles with her emotions, as they've slowly been coming back. Feels anger the strongest, as well as happiness, most things in-between are barely felt, if at all.

• Very strong-willed despite her botched sense of self. Has a pretty strange moral compass, but sticks to her guns for the most part.

• Rendered insane from the experiments done on her, is completely aware of it, and disturbed by it slightly, but knows no better.

• Created by an unknown, malevolent entity. The purpose of her species was to infect and eradicate the sentient species of a world to allow for takeover.

• Created the name Leodora for herself. Was never given a name at her creation. Never had direct contact with her creators and was simply called 'Devil' or 'Demon' by her victims.

• At some point, she became displeased by her life in servitude, and found someone with strong magic who managed to deactivate the collar around her neck and the cuffs around her wrists. She cut open her stomach to remove the tracker herself, and patched herself back up.

• Found the forest not too long after that, taking her cervine form and deciding to remain here a while. The peace brought her a sense of joy, though she's never been able to fully experience it, leading a very nonpeaceful life.

Very fond of. Wouldn't say she loves her, only because she doesn't know what love feels like, but enjoys her presence and will protect her from major harm. Is fairly abusive to, claiming Moira has to learn for herself how the world works. Has been gradually poisoning the fawn since she found her so that Moira grew immune to Leo's biological poison.