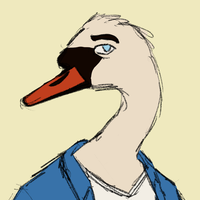 Richie's dad. Got divorced at 34 and has been taking care of Richie since.

Joseph had a rough upbringing. His father was verbally and physically abusive towards him, which, once he was 12, ended with his mother divorcing the man and taking Joseph with her. It was then that Joseph got to flourish. He started doing better in school. At 16 he got his first girlfriend, with whom he had a short-lived relationship. Throughout his late teens he had multiple girlfriends until he met the woman who'd become his wife at college. Both were taking a masters degree in architecture at Arkitekthøgskolen i Oslo (now called Arkitektur- og Designhøgskolen i Oslo). Joseph and Ingerid completed their masters degrees and found work in Fredrikstad.  They got married at 25. And at 32 had Richie. After only two years Ingerid left Joseph, and even left Richie for him to take care of.

Distraught by the grief of his wife leaving him, but determined to give Richie a good home he worked hard on becoming the best father he could. Learning to use less negative and more positive reinforcement.

Today he's proud of who his son has become, and is happy to have given Richie the best chance for a good life that he could.