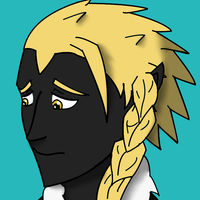 Species: Annimal (though this picture is before he turned into that)

Personality: Protective, caring, brave, a joker when around those he's comfortable with, and loyal.

Weapons: his rapier and handheld gun

Powers: shift-shaping, shadows, can go into shadow to hide/sneak up on enemies, music and singing will make him stronger.

Bio:  He used to be a regular human till the day Cheyenne, his younger sister  was born. His village was attacked and we was out fighting to protect  it. But he was captured and thrown into a different world. A world that  was taken over by the enemy and had what is called, "Darkness  Radiation," surrounding it. It causes the victims to become mutated. And  thus his skin became darker, his eyes yellowed, long claws formed, and  scales on his arms and legs. Even after being changed into Annimal, he  chooses to keep his looks because he no longer feared his changes.

weakness:  lighting, poison causes him to be quite weak even if the poison is weak  it self. He can only use his powers if he had enough calories in his  body

Character and picture belongs to me.