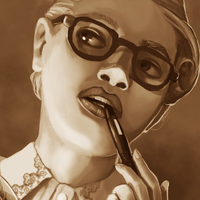 "It's easier to dismiss ghosts in the daylight"

A new roleplay character to take the stage since the death of Henry/Julia, for an urban fantasy series that's been on-going since the June of 2017. (EDIT: Ended 29th of September 2019)

When it comes to her face, Christine considers hers to be quite a lucky draw of the genetic lottery, apart from the bad eyesight.

Christine's hair is golden blonde, possessing a naturally wavy texture and reaching just past her shoulders. In casual occasions, such as at home or on a normal work-day, the woman likes to keep it off her collar in a neat, rolled bun. When time comes to attend an important interview or a social event she'll do so with her hair curled and set up in various arrangements of victory rolls, secured in place by an army of hairpins. She's proud of her hair and sees it as a pivotal part to making a professional first impression.

She has a round face with soft features, making the woman look younger than her actual age. Christines' youthfulness is furthermore accentuated by the shape of her full lips, often set in a small pout when she's hard in thought. Her eyes are brown in color.

She's of a slightly above-average height for a woman. Her body still retains some old stretch marks from childbirth, but they've faded to be nearly unnoticeable over the years.

Christines tries to go for a neat appearance. In casual settings she prefers the combination of a blouse and a modest A-line skirt to full dresses, which doesn't mean that she'd oppose ruffles, floral patterns or other feminine touches. No matter what, her clothing is always made of high-quality materials and up to current fashions. Her tastes tend to run on the expensive side.

She can't bear to take her wedding ring off, but at the same time feels that as her husband has died she's not "properly" married anymore and shouldn't "pretend" otherwise. Thus she's taken to wearing her wedding ring on her right hand rather than the traditional left.

Due to her upbringing and the wealth of her husband Christine has developed an expensive taste in gifts, fashion, and potential future romantic partners. She's kept her pickiness even during rationing, but has also put it to use "for good" in determining which potential stories are of a high enough quality to be worthy of pursuing. Christine often speaks her mind. Even though the woman attempt to soften her words up she can nonetheless come off as rude or arrogant, for she dislikes outright lying even for the purposes of saving someones feelings.

She's prone to fantasies and daydreams - which is yet another skill which the woman has found a professional application for, letting her mind wander when working on a new story. Despite fanciful interpretations and wild theories she makes an effort not to lie nor ignore known facts in her journalism-writings.

Christine could be described as casually religious, of an anglican-christian denomination. Due to childhood events the woman possesses quite a strong belief in the existence of ghosts, bundled which comes an interest into matters of spiritualism. She's acutely aware of all the scandalous hoaxes undertaken in the previous decades regarding the field of communicating with the dead, and has come to only show deeper interest towards stories that can't be immediately proven to be fake.

Born to a low-middleclass family as Christine Evelyn Porter she grew up in an old house on the outskirts of London. In her youth the house showed signs of being haunted by the spirit of her grandmother, until the old womans will was located. Christine married Jonathan at the age of 18, and soon had her one and only child Victor. Despite the usual hardships, thinking back on it, she considers it to have been a happy marriage. Once Victor got older she went to work as an investigative journalist for Peregrine Press Agency, selling her stories on to various interested publications. She escaped compulsory conscription during WW2 due to Victors age.

She heard of her husbands death in the summer of 1945. Caught in a Werwolf ambush, along with most of the rest of his section. Christine got together with other widows for support and, through them, learnt of outlandish claims that the men who'd survived the attack had written home about.

Nowadays she works with her intern buddy Mr. Mason, mostly on investigating and debunking claims of ghosts or other similar phenomenons, falling back on writing mainstream news-stories only when business is slow and money needs to be made. And money does need to be made, as she's running out fast with no rich husband to supplement the income. 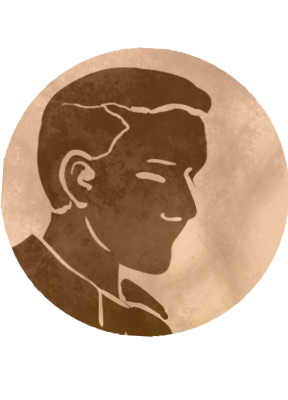 [ son ] An ambitious and studious 15-year old boy who misses his father. 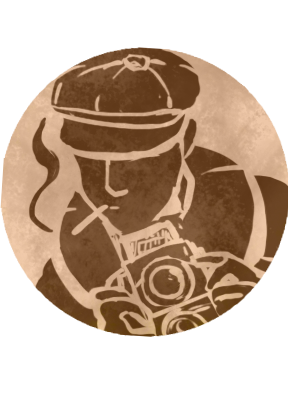 [ sidekick, eyecandy ] An intern with a cockney accent whom Christine likes to have around because his skillset and temperament makes them a good team. The young man aids in her investigations, particularily to dodgier areas of the city, doing everything from holding the camera to picking locks. 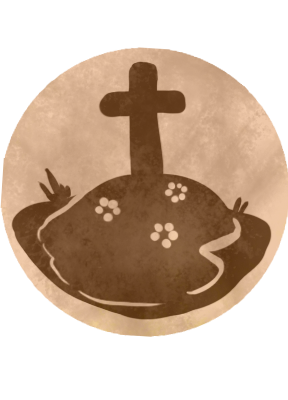 [ husband, deceased ] The man with whom she'd been married. Wealthy, and a bit of a rebel - thus bringing together the two traits that Christine values the most in a man. He died in The War, of causess that his wife suspects were of a hush-hush supernatural nature. 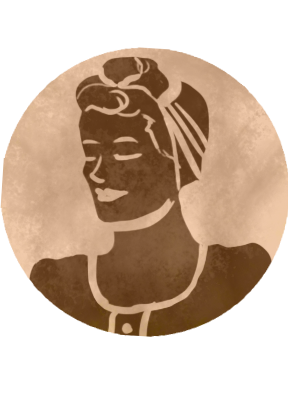 [ friend ] One of her best friends from before her marriage. Financially on harder times. She's got two kids whom Victor has to babysit when "mommies are talking". Christine feels at ease around her. 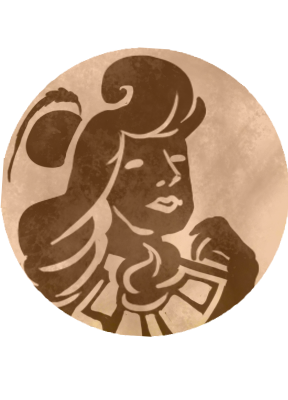 [ friend ] A second close friend, whom she gained after the marriage. She's rich, and posh but also trustworthy. They discuss a lot of matters that Dolly would not know about, such as fashion or foreign brands, and have much in common in their tastes and aesthetics. She has a daughter around Victors age and the two kids are friends with one-another. 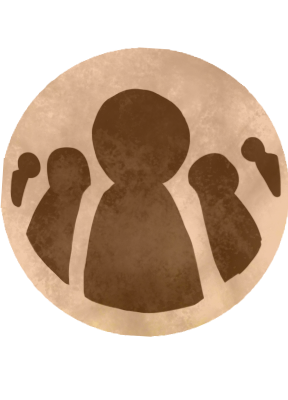 [ her family ] Mother, father, older brother Isaac + other siblings, maybe more? A family of low-middleclass background, who've stepped in to aid in raising Victor after Jonathans death. Though they care for Christine they're highly worried about what they call her "spending habit".

[ in-laws ] Mother-in-law, father-in-law + others (one family patriarch named Roland). An "old money" lineage. Christine retains detractors among them, despite the immediate in-laws having warmed up to her. Victor is more universally liked, having spent portions of The War in his grandma's countryside estate and grown close to many of his paternal relatives.

Notes & resources for my own personal perusing

Because sometimes I want a nice place to keep things without resorting to notepad files.

Researches in the phenomena of spiritualism, Sir W. Crookes, 1874

Phenomena of materialisation, A von Schrenck-Notzing (1923)

Note: Read up on interviewing techniques.

Starting time: 20th of December 1947. Starting point: An ordinary evening negotiationg a new dress in Harvilles' Tailory. Then a member of The Cogwheels walks in and informs everyone present that they will be murdered by a demon in three minutes.

Checkpoint: 02 of January, 1948. Werewolf takeover, starting with the kidnapping of Alice Evans. The core of The Cogwheel Association gets assassinated by Margaret in their base in Washington DC. What followed was a massacre, from which the PC's narrowly escaped. The general population is quickly becoming aware of the existence of the supernatural.

The roleplay ended shortly afterwards on 28th of September 2019 due to GM burnout. We were assured we won back our world after years of hard work.

Changes to personality and beliefs

If demons are real, then angels must be real. And if angels are real, could The Cogwheels press claim of working "on authority of god" be literal?

Victor was right, Jonathan was killed by actual werewolves, not the nazi. Actual werewolves exist and as far as Christine is concerned they are Always Chaotic Evil.

Even the invalidity of mediumship has been called into question after she used the ouija board to speak to something referring to itself merely as her "Power". 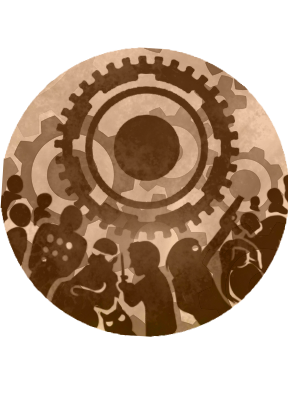 [ for the greater good ] The Cogwheel Association is the result of a merge between The Occultists and The British Royal Supernatural Department, taking the strengths of both factions. Founded in memory of Julia/Henry by General Montgomery Hammond in late 1945 The Cogs are Englands primary defense against the supernatural. They need a journalist on board. The public must learn about demons. 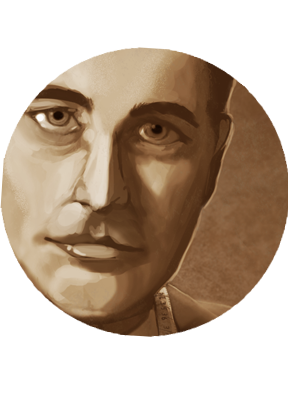 [ another players character ] An exceptionally esteemed tailor to whom Christine had been a regular customer until the death of her husband. Polite and reserved. Oscar's father originally ran the tailory with him until his death in service resulted in the shop being closed. Oscar re-established the family business after The War, running the place with his assistant, miss Wright. 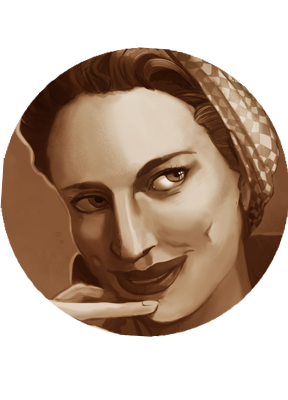 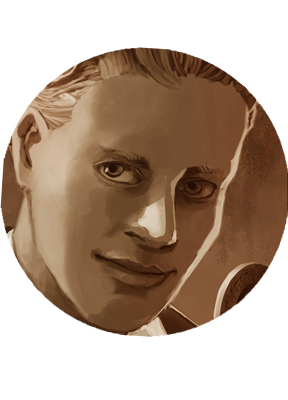 [ another players character ] The fourth player-character. He's a politician with a callipygian figure and he has cookies. After escaping the events on the 2nd of January he and Christine grew closer over mutual hardships. 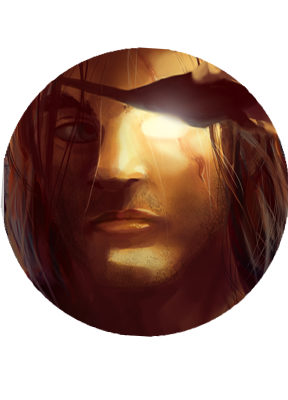 [ nephilim eyecandy ] [deceased] Vice-commander of the Cogwheels Association. Weird gray-mixed hair and an eye that functions as both a demon-detector and a flashlight. Christine secretly thinks that he's the hottest thing since Nagasaki (though obviously not in those exact words). Died in the massacre on the 2nd of January, 1948 Rendered incapable of continued existence on Earth due to injuries. 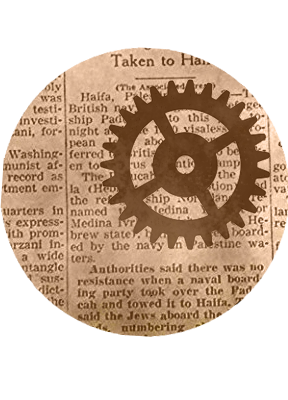 [ vampire eyecandy ] [deceased] Goon of a powerful american vampire-lord. Once exorcised and mind-wiped Christine after a case of traumatic demonic possession. Mysterious, dangerous, sexy and unlike Samson also clearly interested in her. Either two weirdos independently reached the decision to use a scythe as their primary weapon or he's somehow connected to This One. Died in the massacre on the 2nd of January, 1948. Survived the 1948 massacre with intervention from Dr. Simmons.