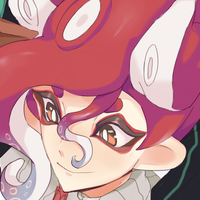 Personality: Since intentionally losing his memories, Rift has become less guarded and more open with his emotions; to those he doesn't know he may first come off as quiet or serious, but is actually kind, naïve (most things go over his head) and nosy. Genuinely sweet, Rift enjoys doting on his friends, typically experimenting with food recipes for them to try. Since he has a taste for high fashion, he enjoys "fixing" with others' outfits; enjoys meddling with relationships. Rift sometimes retains a bit of his old self, such as with high intelligence and understanding of complicated scientific facts/terms. Doesn't enjoy fighting much & is weak.

Occupation: Ex-octarian scientist before promptly "deleting" his memories; currently works as a cashier-turned assistant chef at Amari's café because he found an affinity for cooking. Acts as agent 8.5.

Skill/weapon: Long range weapons as he flounders when he finds himself up-close with an opponent. Enjoys chargers the most, like splattershot chargers & e-liters.