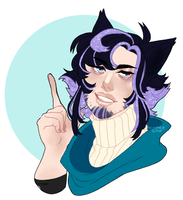 Astrid comes off as cool and suave, and possibly a bit creepy, and he has an unapproachable, mysterious air about him. This illusion starts cracking once you get to know him, as "weird and creepy" turns out to be "deeply, intensely shy". Astrid is actually very friendly and earnest but his social anxiety gets in the way, so he tries to keep his true feelings close to his chest. He takes his duties seriously and dislikes any change to his routine.

Astrid was the spirit of a small town's graveyard, charged with protecting it from evil spirits and other ne'er-do-wells that may defile it. He watched over it faithfully, eventually becoming witness to the village's slow decline as a famine ravaged the town and its residents fled to greener pastures. He was left in the middle of the ghost town for decades.

As year after year passed he became convinced he was doomed sit in in the abandoned, crumbling graveyard forever... until a witch with too-white hair took pity on him and offered to break him out of his makeshift prison, no strings attached. He didn't expect for whatever she did to turn him human, but he absolutely was not complaining when he stepped beyond the graveyard gates for the first time. Astrid, feeling like he owed the witch a debt, then followed her to Mahou Wando and has kept her company ever since.