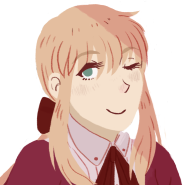 This character is a work in progress. Other tabs for Rosemarie's later appearances and story roles will be added eventually. 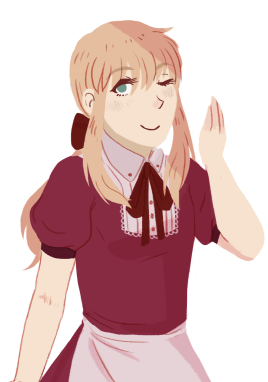 “Why won’t anyone listen to me?” she groaned. “Shouldn’t this be interesting? Revolutionary, even! How can Mrs. Evergreen just throw me out like this?” She took a deep breath and then exhaled. “Alright, maybe I shouldn’t have jumped on the chair; I might have gotten a bit carried away.”

Rosemarie is a bubbly and cheerful young lady from a considerably rich family of Bellamys. Despite her high status, she doesn’t seem to consider it much, and instead of learning proper etiquette she prefers spending her free time outside with other kids. Headstrong and fiercely independent but sometimes annoyingly stubborn, it’s hard to turn her head once she has decided on something. Rosemarie is generally viewed as a charming and pleasant girl but also rebellious and cunning, which makes especially other kids respect and admire her for her wits and almost anarchistic attitude by scorning the social systems she finds outdated and unnecessary. However, she can also be a little too rough with people and isn’t always very good at dealing with those more softer in nature than her, and she is very demanding towards herself and others.

She has a strong interest in politics and social behavior of people, and wishes to become an author when she grows up. Some find her fascination with the society somewhat unsettling as she is very young yet knows so much, and her strong need to rebel against the system and constantly talk about the flaws of the society can be off putting to some. Despite that, Rosemarie means good and is usually appropriately informed about whatever she is talking about - it’s just that her attitude can be seen as way too rebellious and provocative by adults, especially due to her age and sharp tongue.

Ilja is her best friend and she is also strongly affiliated with a group of kids consisting of Ilja, Karl, Thomas, Archie, Gerda and Titus. She is also a relative to Marion, although they never met as Marion had already died before her birth.

Rosemarie is somewhat tall for a girl her age, and while she still doesn't have a very distinct figure due to her puberty being far from finished, she has a sporty and boyish build. Her skin is light and clear, and she has lively, grayish green eyes with long and dark eyelashes. Her hair is light (close to cashmere) with long bangs combed to rest on her shoulders and chest, and the back of her hair (reaching her mid-back) is tied up near her neck with a red ribbon. She also has a small and pointy nose.

The girl is most often seen wearing a wine red dress with white collar part and a small apron of the same colour, tied around her waist. She is also wearing a red ribbon around her collar, matching with Ilja who has an identical ribbon. She is also sometimes seen wearing less attention-gathering clothes, most often simple brown pants with suspenders and a white collared shirt. She also sometimes wears a hat or a cap where she stuffs her hair if it's on her way.

Her way of moving is often very confident, and she has learned most of her gestures and habits from boys her age. This makes her appear somewhat masculine, especially with her often cheeky and very lively expressions. She sometimes has wounds and bruises on her as a result of climbing on trees or other rougher outside activities, but she is generally very good at keeping herself out of physical harm in the fear of getting yelled at by her grandmother.

Very typical for Leo people, Rosemarie is also very energetic, charismatic, social and very concerned with the people around her. Majority of the time she has a very cheerful and relaxed attitude, not concerning herself with things that she finds unnecessary and boring, nor thinking much about her own social standing and how she should present herself among aristocrats. Because of this she is deemed to be a problem child by her grandmother, the matriarch of the family, but is very liked by those in lower social standing. While Rosemarie is very tuned to the people around her and their opinions of her, she is usually not particularly interested in conforming to people’s expectations if she herself sees no value in them: as such, she is disinterested in her grandmother’s teachings of how to become “a proper lady”, and Rosemarie even scorns the strict and old-fashioned beliefs of hers.

Rosemarie’s behavior is considered to be tad rough and tomboyish, often climbing on trees, rooftops and walking around high fence; generally behaving in a manner not expected of a girl of her social standing (at least according to her grandmother’s teachings). Rosemarie, however, prides herself in always being true to herself, much to her grandmother’s dismay. She is also somewhat of a rebel and has a natural need to do things against society’s expectations if she feels like the expectations are wrong, outdated or biased.

Unfortunately her strong need to go against the society's expectations often results in people finding her strange, and other nobles of her age don't really wish to associate with Rosemarie too much in the fear of ruining their own family reputation in the process. She is not a social outcast by any means, but most aristocrats seem to consider her trouble, or at least a person they should keep their eyes on.

Rosemarie has a firm belief she can handle any sort of trouble that just comes to her, either all by herself or by the help of other people. Although she generally doesn’t want to rely on other people and depend on them too much, she knows many people would gladly help her if she really needed help, and Rosemarie usually doesn’t let that slip past her. However, she can often overestimate her abilities and try to do more than she is capable of, often resulting in trouble.

She is highly social and known for reaching out for people really fast and put effort into making sure nobody would be alone, as if finding it to be her job. However, as kind as she is, if you show no signs of wanting to cooperate with her or wanting to be her friend, she won’t bother with you for too long (unless particularly fascinated by you, in which she can become a little bothersome for people who just want to be left alone). Nevertheless, kind as she can be, Rosemarie won’t let people take advantage of her kindness, making the idiom “you can take a horse to water but not force it to drink” one of her favourites.

She doesn’t always know when to stop in time though, this often leading her into trouble and dangerous situations. She is also curious to a fault, frequently getting involved with things she otherwise would have no business with, and can be tad nosy about people she finds interesting. As she is impulsive, she also has a tendency to lead her friends into trouble as well, and isn't necessarily all that reliable when it comes to things she has no personal interest in.

Rosemarie is the only child of two wealthy aristocrats, her father coming from the well-known family of Bellamys and mother from the less known but equally wealthy Bernadotte family. As her father was a courtier, he was mostly absent from Rosemarie’s life, leaving the girl spend more time in his library than with the man himself. Regardless, he was always a loving father whenever he was home, and although tired, he would find the time to have time with his favourite (and only) daughter. This, however, left Rosemarie being raised mostly by her mother and grandmother, the latter being the matriarch of the Bernadotte family.

Because Bernadottes were the ones that basically ruled over the house when Rosemarie’s father was absent, her grandmother tried her hardest to raise her granddaughter with her strict morals and ideals of what a girl of her standing should be like. This was particularly persistent due the fact she felt like she had failed raising her own daughter, who had ended up becoming “much wilder than was appropriate” in her opinion. But because Rosemarie’s mother herself was rather adventurous and liberal in her beliefs, Rosemarie ended up taking far more after her mother than listening to her grandmother’s teachings, even though it was evident she kept a strict order in the household.

Despite her position, Rosemarie attended public school as requested by both her and her mother, but on the side she would get homeschooling up until she was 10.

Rosemarie grew up surrounded by arts and culture, and her father’s vast library she has now almost gone through entirely, save for books she has literally no interest in. However, as her mother was not the social type, she didn’t end up socializing all too much with others of her social position, but their family would occasionally throw parties in their mansion to keep up with appearances.

She met Karl and Thomas when the boys moved to her city and started attending her school, and despite being older than them fast made friends with the boys. After that she would also befriend Ilja when he arrived in the middle of spring semester, and eventually become best friends with the boy.

In her current canon she has teamed up with a bunch of other children around her age and together they get into all sort of adventures, some more dangerous than others.