Fractured, not broken
"I will persevere and so will you."
Name Jacinto Laurence
Nickname Cin, Jas
Biological Age 28
Chronological Age 6
Gender Male
Sexual orientation N/A
Alignment Neutral Good
Race Enchanted Doll
Occupation Royal guard
Residence Small town by the royal palace
Main theme This Delicate Place
Voice Beautiful, deep and smooth
Appeal to Strangers Seems completely disinterested in everything. Very difficult to approach because of his lack of emotion and formal stiff posture. Can appear intimidating and awkward. Makes little friends.
Appeal to Mutuals Is really quite the opposite of how he looks. Very warm and caring. Even if he has difficulties expressing his feelings, they are still just as valid and real as anyone else's.
About
Traits
Humble
Caring
Determined
Enduring
Aloof
Intimidating
Secluded
Unapproachable
Summary

Jacinto was given life to by Maz -- one of the three skilled doll masters in his world, however since Jacinto was Maz' first Doll due to complications while designing Cin, Maz made an error while adding the horn on his head and it became infected. The infection was not noticeable at first, and it was not only after it became visually clear that Maz found out something was wrong. He managed to halt the spreading of the infection, but the damage had already been done and Cin's right part of his head had suffered for it.
Going by the theory that the left brain controls logic and sense while the right brain controls emotions and creativity, Cin had been damaged in the part of his head which dealt with emotions. While he is still able to feel emotions perfectly fine, the ability to show and express them has become considerably more difficult for him. It is as if his body can't keep up with his inner self, and is left paralyzed when trying to express himself.

Jacinto has taken to using more body language when conveying what he means, and it often takes form of hand gestures. While he is not mute, he's a man of few words (which really doesn't help his cause of having trouble expressing himself tbh) so it might come off as a little odd how he speaks so simplistic, but with so much body language. Sometimes however, his words doesn't reach far enough and he tries to over conpensate with his hand gestures and can end up looking rather awkward while waving his hands around while struggling to find his words. It's not that he doesn't have the vocabulary to express himself, it's just that his mind goes blank and he doesn't know which one of the words he's supposed to use. He's at a loss for words to put it simply, and can get easily overwhelmed because of it due to the added stress of not being able to make others understand.

Not being able to express himself, he doesn't have a way to vent his emotions and feelings either and tends to bottle them all up. It strains him doing so, and if he bottles up too much and is sent over the edge with an intense emotion, he will fall violently ill. The only ones that are able to treat this illness are one of the three doll masters, so he usually goes to -- or if it's a worse case -- sent to Maz for treatment. To prevent it, Maz has taken precautions by intiviting Cin to occasional therapy sessions where they try to work out some of Cin's lingering emotions, apply magic to ease his mind, and just practice expressing himself in general. 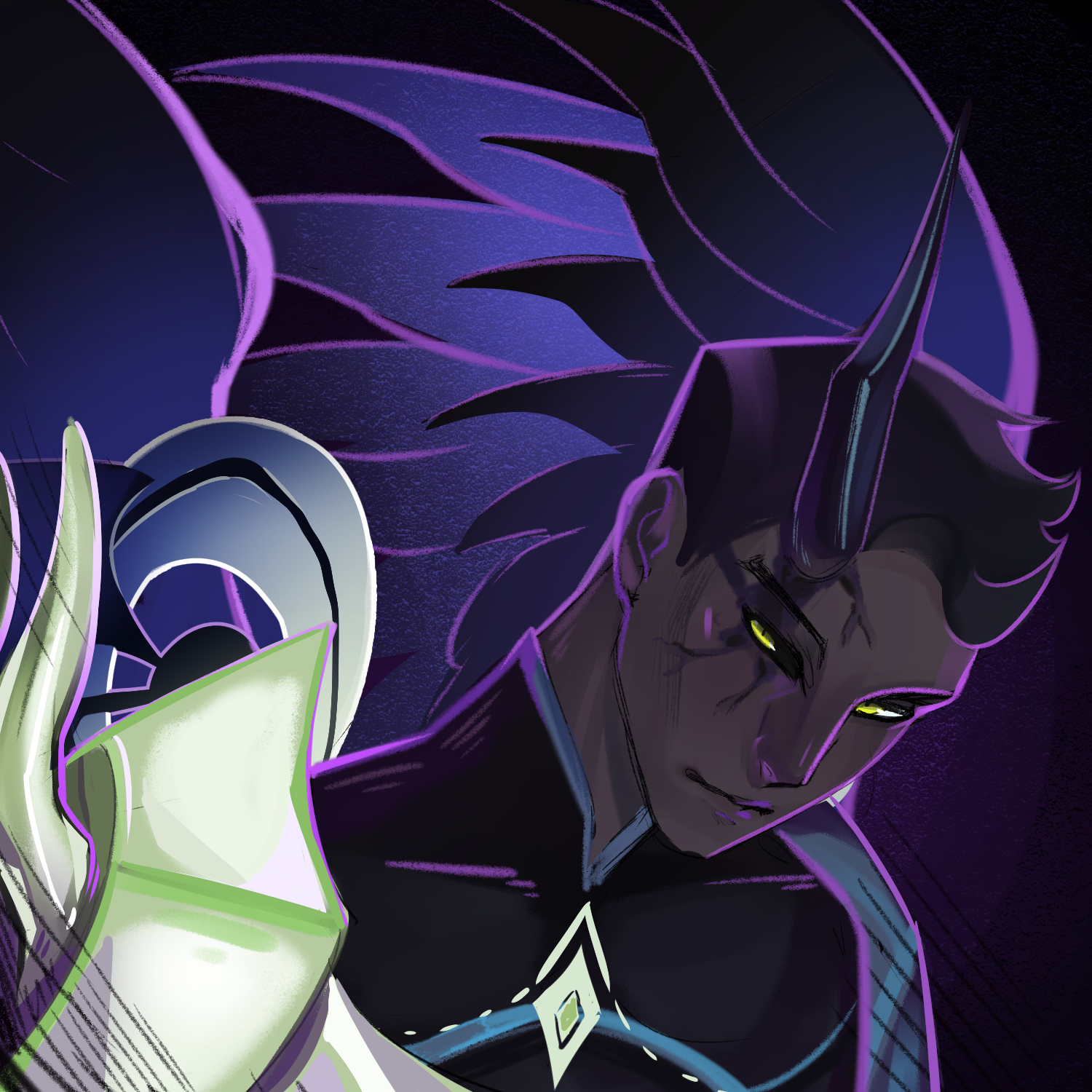 Jacinto is actually a fairly mellow person. While the infected horn crippeled his ability to express emotions, it in no way stops him from feeling them. He can feel and think just like any other person, it's just that his body can't necessarily keep up with said feelings.

As a commanding officer in the royal guard, it's a given that he is a skilled warrior. He is quite a bit physically stronger than the average man or Enchanted Doll as he was made for heavier labour, and uses this strength effectively both with and without a sword in hand. While his weapon of choice is a single-handed sword which is longer than the average one-handed sword, he's perfectly capable of dual wielding or wielding a two-handed sword as well. Due to its length, Jacinto doesn't keep it in a hilt and rather just summons it when necessary.

Jacinto's main source of magical offense and defense is his ability to conjure bones of varying size, shape and strength. He can conjure bones relatively quickly depending on how familliar he is with the bone-object being summoned. For example, he's able to manifest his bone sword in an instant due to how this is his main weapon of choice. He's also able to conjure cages of bone, spears and shards to hurl at his opponents or use in various ways.

A sub-power from his conjuring skills are lime-colored flames. They manifest whenever the summoned bones are formed, as if made from the flame itself. The flame isn't warm or powerful enough to be used as a projectile to harm or blast opponents, but it's great for lighting up the area, Since it's made of pure magic, it doesn't burn on contact unless that is the intention behind it. If desired, Jacinto can light a cigarette or start a fire with it by setting fire to other things, but it's not nearly as powerful enough to be blasted at people.

Another power he has is being able to fly whenever his wings are visible. He doesn't use them regularly, and only uses them when he needs to travel or move quickly like when he's fighting. When flying he doesn't need to flap his wings to stay afloat, they keep him suspended in the air as if floating in water and he can move freely without needing to move his wings since it's pure magic keeping him up. But in all honesty, he just prefers to walk and take it slow while observing his surroundings.

Jacinto is actually an amazingly skilled singer. His voice is deep and silky smooth to begin with, but his real charm shines when he sings or hums. It's been said that any person who hears him humming while he's patrolling the town at night will have second thoughts about what ill-intentioned actions they had planned, while children will be put to sleep, and adults stop their quarrels. He's a rather modest man who doesn't usually sing for people, and would rather just keep it to himself. If he does agree to hum or sing for someone, it's a sign of absolute trust, even more so if he does it without being asked.
Humming helps calm his heart and feelings, so whenever he's put in a stressful situation he often starts humming for himself. This can be quite unnerving as he sometimes starts humming when he has to fight.

Design
Colors
Skin
#493E47
Hair
#18131D
Eyes and gems
#FCFF29
Horn
#2A2C50
Tunic & Cape
#262934
Cape gradient
#678C98
Inside cape
#CCD970
Bone armor
#E5F2E2
Wing detailing
#2C2666
Wing detailing
#5858A8
Height 192cm / 6' 3,5"
Build Masculine and fit
Eyes Neon yellow
Skin tone Dark
Hair Black
Hairstyle Short, slicked to the side in the front
Demeanor Calm and quiet
Appeal Intimidating and strong
Smell A faint smell of flowers
Posture Stiff and formal
Notes
Extra
Theme songs
This Delicate Place
Intro
Empty Crown
Tropes
Kuudere
A character that appears emotionless, cold, blunt and cynical. That's what he is on the outside but he is actually caring and nice on the inside.
Death Glare
The Death Glare is a "calm", murderous look often coupled with a tensed and menacing posture, others with a deadly stillness, but (with the rarest of exceptions) is served with deathly silence.
The Stoic
he Stoic sometimes displays emotion when under extreme stress or in other highly emotional situations, but their usual repertoire consists of mild boredom, detached interest, dull Surprise or dignified disdain.
Not So Stoic
Not So Stoic is what happens when the Stoic is pushed to the edge, and falls off.
Good All Along
A character that is thought to be one of the bad guys turns out to have always been on the side of good.
True Beauty Is On The Inside
We shouldn't judge people based on how they look on the outside but rather how they look on the inside.
Trivia
Relationships
Trust
Respect
Love
Attachment
Safety
Maz
Doll master

Jacinto holds very high regards for Maz due to how he's his doll master -- his creator.
Maz' mistake crippeled Cin's emotions and he knows this, but would never blame him for it as he knows how much it pains Maz and how much he is trying to make up for it. Cin knows how lonely Maz can get since he lives in a secluded area and tries to visit him from time to time outside of the therapy sessions as well, just so that he can keep him company. He genuinely enjoy spending time with Maz, as he is a wise man and has much to teach him. Cin feels guilty that he's causing Maz to worry so much about him, but also thankful for how much he cares, so he tries to repay him with company and small favours such as bringing him supplies from the town over and other small errands.

To Jacinto, Tufa is like that one person he can think about to make the cold night a little warmer. He doesn't realize it yet just how much she actually mean to him as love is an unfamilliar subject to him, not really sure how to place his feelings for her. All he knows for sure is that he really enjoy her company, and is always willing to take the time to spend time with her if she wants to, even with his busy guard schedule.

Having met Helios duing a scuffle of ruffians targeting him, Jacinto leapt to the rescue and securely escorted Helios to safety while aprehending the villains. Since then, Jacinto felt the urge to make sure the small doll is safe, acting like a big brother. Due to Helios' wings, Jacinto gets the impression that just as an insect's wings, he might be as fragile too, and handles him with the utmost care and gentleness, sometimes even hesitant with touching the boy.
While Jacinto thinks he's simply keeping Helios safe and with company as Cin is invited out by him quite often, it never strikes him as odd and that maybe -- just maybe Helios' intentions and goal is more than just being friends..?