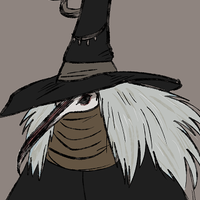 A creature of ambiguous origin that is hostile towards any human being it sees. Generally one can avoid encountering it by staying on the safe paths of the Dark Forest, but even then, it can lead a traveller astray by setting up lanterns that burn a light that's ever so slightly off in colour.

It is genderless by nature, it doesn't really care about pronouns or gender one might assign to it for whatever reason.

Amorphous, almost appears as though it's made of dark ooze covered in abrasive hairs. It can extend any part of its body and also summon more limbs if need be. Can be eerily fast in its movement, but if it has devoured an entire person, it is much slower and more clumsy.

It is relatively short and squat, but due to being able to extend its limbs it can appear more imposing at will. The mask appears to be affixed to its face. it has a wide grotesque mouth that is lined with innumerable amount of teeth that it seems to shed regularly.

It is an ancient forest with foliage so thick that no daylight can pass through. Some believe there is some arcane magic to be found there. If a hostile being like Rostrum is any indication, it may be true...