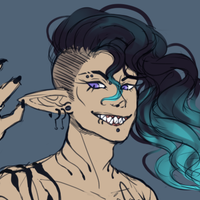 “Flee the waters, for the Maneater has arrived.”

Ilya is a heavily tattooed great white shark mer that wanders the global ocean. Once the leader to the thriving Shoal Curruid, he has fallen far from his former position.

Previously, Shoal Curruid would have described their leader as a prideful, aggressive, but ultimately good mer who put his family first. He would spend many hours out in the waters, hunting and tracking down large mammals to feed his family, particularly his growing shoalings. One day however, while he was out hunting down a leopard seal, a dry-lander explosive detonated underwater and destroyed the caves his shoal was using as shelter. Ilya came back with his prize, only to see his entire family dead and torn to pieces. Overwhelmed by grief and rage, he tossed away all notions of compassion and understanding, existing only as a revenant driven by hatred and vengeance.

To satisfy his grudge, he stalks lone humans who enter into the water - divers, swimmers, those who had fallen overboard - and drags them down to their watery graves. Afterwards, he eats their flesh and fashions jewelry from their remains. Each of his squid ink tattoos represents a victim. An aura of death follows him wherever he goes, unnerving even the largest orca and shark mer.

Most mistakenly believe that he hunts coldbloods, even though he makes no effort to hide his manhunting ways. Ilya doesn't care what other mer think of him - as long as they don’t get in his way, he is willing to tolerate all sorts of rumor and speculation.

Kay was the oldest and strongest of Ilya's shoalings, who was well on his way to becoming the next leader of Shoal Curruid. Ilya was immensely proud of his son, though he never said it out loud. Now he just wishes he could see the kid one last time.

A giant orca mer who happens to be inhabiting the Fjords area. Ilya doesn't fuck with them because great white sharks know better than to fuck with orcas.