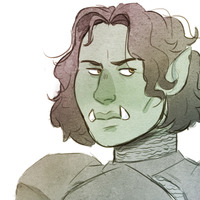 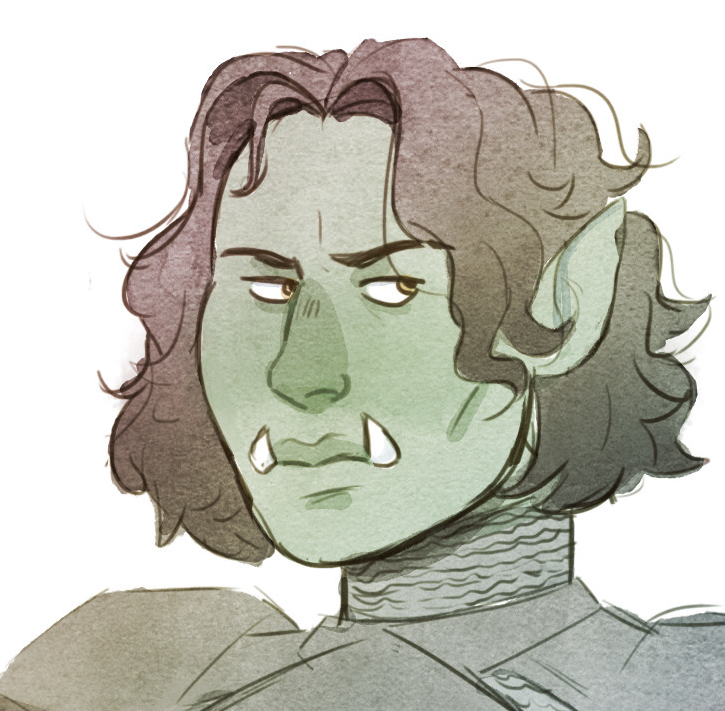 Quite the reserved woman, Maztha doesn't often make it a point to express her outward feelings towards others. At a glance, some may believe she feels nothing but contempt for her companions half of the time - which, while untrue in recent months, could be a given due to her constant disgruntled expression.

Despite being reserved, she still enjoys being in the general vicinity of others - especially family. Eavesdropping is something she does often, for either her own entertainment or to get useful information out of somebody... or both!

She often holds herself in a higher regard to those she doesn't know, however, which often leads to her coming off as incredibly arrogant. Given her status in the church as a cleric of Helm as well as her views on the law, in some cases she does believe she has a higher level of moral superiority than others..

Emotions must not cloud our sense of what is right and true, or our logical thinking.

It is my duty to respect the authority of those above me, just as those below me must respect mine.

I'm determined to make something of myself.

I want to return the favor to the people who have helped me the most.

Everything I do is for the common people.

I have a family, but I have no idea where they are. One day, I hope to see them again.

I'd rather eat my armor than admit when I'm wrong.

I will never fully trust anyone other than myself.

I'll say anything to avoid having to do extra work.

I have trouble trusting in my allies.

Features & Traits
CLERIC DOMAIN: LIFE
The Life domain focuses on the vibrant positive energy – one of the fundamental forces of the universe – that sustains all life. The gods of life promote vitality and health through healing the sick and wounded, caring for those in need, and driving away the forces of death and undeath. Almost any non-evil deity can claim influence over this domain.
RACIAL TRAIT: RELENTLESS ENDURANCE
When you are reduced to 0 Hit Points but not killed outright, you can drop to 1 hit point instead. You can’t use this feature again until you finish a Long Rest.
RACIAL TRAIT: SAVAGE ATTACKS
When you score a critical hit with a melee weapon Attack, you can roll one of the weapon’s damage dice one additional time and add it to the extra damage of the critical hit.
23
Age
CIS WOMAN ; SHE/HER
Gender
5'0"
Height
170 LB.
Weight
STOCKY, MUSCULAR
Build
DEWTHRA
Homeland
TRAVELER
Profession
LESBIAN
Sexuality
History

Trivia
She's Big Gay
she almost married a woamn
aaaargh
thats the noise she makes every day she wakes up
idk
wip
Links
AMRAS ELSINDIN - played by arctic.
Maztha and Amras can be seen constantly bickering between one another about trivial things, such as which way to go, who's sleeping in what room, or even just what to do in general. At a glance, it's fairly obvious neither of them like each other - which was initially true for Maztha. With Amras being a rogue and Maztha being a cleric, they had an opposing worldview that made simply interacting with one another a chore. Amras' lone wolf nature made it hard for her to even do her job as the designated Party Healer; always refusing healing and insisting she can do it herself.

Despite all this, Maztha has grown used to Amras' antics and when they aren't as severe, even finds them endearing. Not like she would ever admit that.

NUDRE TASAL - played by adrian.
After learning that Nudre's marriage had ended over a disagreement, she's lost some respect for him knowing there was ways to prevent it. Having been through a similar situation herself, she hates to see Nudre in such a tough spot... but she's sticking by his side anyway, even if he is a little stupid. Aside from issues with a marriage that isn't even hers, she respects Nudre and considers him the de facto "leader" of their little trio, given that he is the oldest and seems to know where to go.