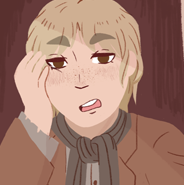 This character is a work in progress. Other tabs for Karl's later appearances and story roles will be added eventually. 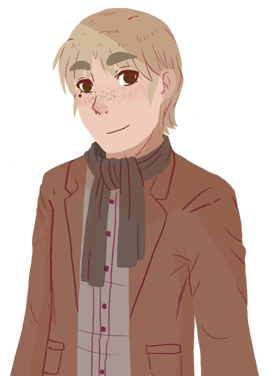 “Adults are so unfair,” the Karl finally huffed and crossed his arms. “They never know how to deal with their problems without involving others!”

Karl is a lively and a tad cheeky young boy with a knack for getting himself into trouble and misadventures of all sort. However, he is simultaneously very honest and earnest, and combined with some degree of pity people feel for him, his occasional mess-ups are more often than not forgiven very fast. Karl is fiercely protective of his little brother, Thomas, and he also worries a lot about his hospitalized mother, as well as his sisters working elsewhere. He can be a bit of a worrywart and concern himself easily with the problems of others, and Karl absolutely can’t stand people weaker or younger than him being picked on. He is somewhat impulsive despite worrying about things a lot, and usually tries to deal with his problems through violence rather than by words - poor Karl is not much of a conversationalist.

Karl was taken from his home when he was young and has then been in two foster homes, the first home being the one where he was constantly physically abused. This abuse led him to become even more protective of Thomas than he already was, and form the tendency of taking the brunt for others alone, without telling anyone. Karl is also somewhat secretive and sometimes even lies to people if he doesn’t want them to worry about him, much to the dismay of Rosemarie who is very concerned about Karl’s physically and mentally demanding job in the factory.

Karl is friends with Rosemarie and Ilja, as well as as Archie, Gerda and Titus. He is also affiliated with Vivian, although very much against his own will.

Karl is a boy slightly shorter than an average, only 143cm tall, but he has not started his growth spurt yet and he is expected to become tall like the rest of his family. He is somewhat skinny but has already wide shoulders and generally a strong and boyish build: especially this shows when standing next to his friend Ilja, who is a year older than him but looks considerably more androgynous in appearance compared to Karl.

He has brown, big and friendly looking eyes and a dark brown mole under his right eye. His hair is ambiguously light brown (sorrel brown) and his big, thick eyebrows are of darker colour than his hair. He has somewhat round, boyish face with reddish cheeks and nose, and has freckles around his nose area. His skin is slightly tanned as a result of working outside a lot. He often has dirt on his face, clothes, hands and feet.

Karl usually wears clothes slightly too large to him as a result of coming from a poor family. They also tend to be a little worn out because they are often second hand. He is usually featured wearing a brown jacket slightly too big for him, a brown and simple scarf tied around his neck, brown-gray buttoned shirt and brown pants with dark brown patches on both knees. He often doesn't seem to be wearing socks and he has simple brown shoes.

Much like any boy his age, Karl is energetic and always ready to cause some harmless mischief with his friends. He has an all-around positive attitude to things and he is lively and loud: people always know when Karl is around. He is generally liked by others, and people tend to find his boyish roguishness charming, and so combined with his earnest and honest nature Karl’s occasional mess-ups are often forgiven. People also tend to feel sorry for the boy because of his hard work at the factory and often unruly appearance.

Although he is commonly perceived as a good boy, Karl has a very short temper and he can’t stand watching people younger or weaker than him being picked on: he is fast to resort to violence and will fiercely protect anyone he thinks needs his help. Karl doesn’t know how to pick his fights and he seems to have a delusion of some sort of invincibility, or alternatively he is disturbingly used to getting beaten up - either way, his pain tolerance seems to be very high.

Karl is the type who intentionally doesn’t want to harm people who have done nothing wrong, but sometimes, especially in a group, he gets very carried away and might end up causing real trouble to people. However, he has a very honest nature and he usually tries to fix the problems he or his groups have caused. As such, he is cooperative and genuinely tries his best to be a good person, even if his young age and immaturity still tend to hold him back a lot.

Karl has a natural disposition of a leader, but he often prefers letting someone else to be the group leader. However, due to the fact Karl often looks after others without even noticing it himself, he often ends up being the leader in spirit and someone people turn to when they need help.  Although a little brash and loud at times, he is still very comforting and surprisingly gentle with people - something not everyone can see due to his bad temper and loud nature.

The boy is not much of a joker, and despite his overall cheery demeanor, Karl is not really  the one to actually joke around. He is also sometimes a little slow to understand jokes and oftentimes takes things too seriously. As result he can also be a little naive and he doesn’t always think things twice. He also doesn’t talk much about himself, but makes it look very natural, and people rarely even realize they don’t know much about Karl at all.

Karl is the fourth child and oldest son born into a working class family. He has three older sisters and one little brother. He lived with his family until he was 8 years old, and was especially close to the oldest sister, who was considerably older than him (7 years) and especially protective of Karl.

Karl’s younger brother Thomas was born when Karl was 3 years old, and very fast he assumed the long-waited responsibility of a big brother. His mother used to work, but giving birth to Karl had weakened her so much she spent her time home ever since Karl was born, and giving birth to Thomas only made her weaker. Karl’s father, in turn, had to start working for both him and his wife, resulting in him being rarely home. However, when he was, he tried his best to spend time with his children and his wife. Although they were poor, they still managed to get by and didn’t live in a complete poverty. All the kids were able to go to school, although Karl and one of his sisters often skipped it in order to help their mother and watch after her (and their younger brother too).

The family’s life changed when the father fell ill, and only two months after that died. Karl’s mother, with already poor health, couldn’t handle her husband’s death and fell so severely ill she couldn’t take care of her children anymore. The oldest sister moved to a nearby city and started working as a teacher in order to support her mother, the second oldest was also forced to move to another city and started working in a bar as an entertainer, and the third sister went to a factory where her small stature would help her to crawl into places adult workers couldn’t go to. Being only 8 himself at the time, Karl was sent together with Thomas into a foster family in another city.

Coming from a poor family and not having a very high education yet, the foster family took advantage of this situation and didn’t treat Karl and his little brother as their equals. Instead they put both of them into hard work, cleaning the house and running errands - all the while Karl also had to attend school. Karl grew really protective of his brother Thomas and wouldn’t let him out of his sight whenever he was just present, especially given just how weak and fragile his brother physically was. Karl would receive physical punishment if he didn’t work hard enough, and the oldest son of the family would sometimes beat him up just for the fun of it, especially when he noticed how Karl would get angry if anything bad was done to his brother. The son would constantly provoke Karl into a fight with him and beat the much younger and smaller boy one time after another.

When Karl had turned 10, one of his teachers noticed the constant wounds and bruises on his body the boy had tried to hide, and eventually made Karl admit they were a result of abuse from his foster home. As that teacher was Karl’s favourite (and Karl, in turn, was his favourite student) he promised to help him out and promised him he wouldn’t have to suffer in such a family. A few months after this and the boys were moved to another city, this time moving to a new family who had lost their children in an accident only a year before. They were nor well-off but very loving, and Karl finally had the chance to start living without constantly worrying for his brother.

Upon moving, Karl and Thomas befriended a girl named Rosemarie and became close friends, Rosemarie often visiting them through their upstairs window (much to Karl’s dismay, who would much prefer if Rosemarie used a door like a normal person).

In order to support Thomas’ dreams of studying in an university, Karl took a job in a local factory where he would do multiple odd jobs, including, but not limited to crawling in vents, running errands and carrying things. While a heavy job not suitable for a child,  the pay is good, and so Karl finds it’s not his place to complain about any and all mistreatment he receives there.

Upon the mysterious arrival of the foreign older student, Karl was initially very distrustful of Ilja and didn’t want Rosemarie to bother with him. Partially this was out of a very legitimate concern of Ilja perhaps being involved with something dangerous, but he also felt a little jealous Rosemarie would spend all her time talking about Ilja. However, upon learning more about Ilja and his circumstances, Karl ended up agreeing to help him.

In his current canon Karl has teamed up with a bunch of other children around his age and together they get into all sort of adventures, some more dangerous than others.

Karl saves Thomas from becoming a pawn for Vivian, an assassin disguised as a nun, but ends up doing her bidding instead. Not wanting to worry Thomas nor admit he has been tricked into doing illegal things for Vivian, Karl tries to keep his involvement a secret and becomes gradually more nervous, until Rosemarie and Ilja find out what has happened.

While there is nothing that can be done, they offer their support for Karl and promise one day they will have their revenge on Vivian.

During this time Karl becomes more than accustomed to the life of crime, his small stature but strong arms and feet being taken advantage of by robbing people and eavesdropping conversations for Vivian’s benefit. He also learns how to use a gun, personally instructed by Vivian who is a demanding and harsh teacher, but very good at what she does.