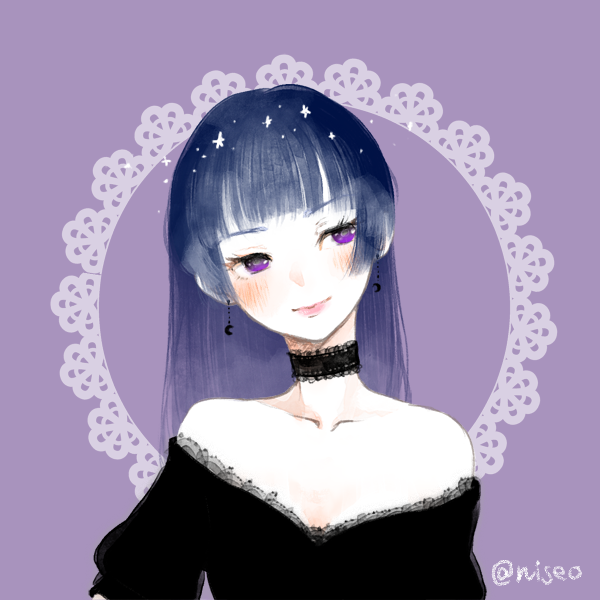 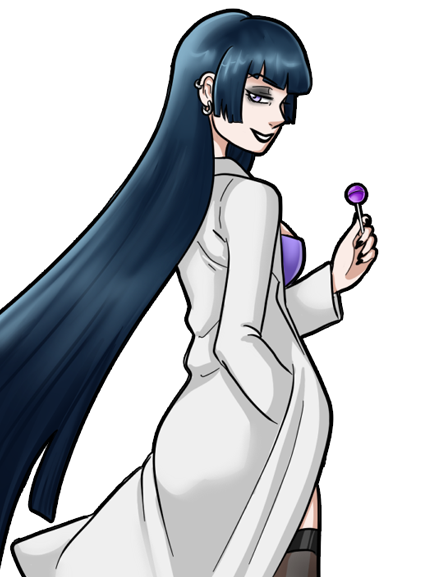 "You don't have to be injured to come by the nurse's office, you know."

At first glance, Rue might seem a sophisticated and mature woman, possibly even intimidating in her tight black clothes and accompanied by one frightening kith or another. But get to know her and you'll see a soft-hearted romantic enjoying a new life in the light after a life of living in darkness. When she isn't attending to the rare medical emergency among Hope students and staff, Rue can be found gossiping with Robin in the Greenhouse, chatting with Estella or failing at video games with Piper at the Arcade. Lately she's been spending a lot of time with Shady...

Though she generally leaves the adventures to the younger residents of Hope, Rue has been known to pop into newly discovered remnants now and again. If there's some sort of romantic tension or trouble, you can bet she'll be there, poking her nose in and guiding people whether they want it or not. She most often visits the Enchanted Forest to discuss magic with Lenta and the Princess, or goes back to her first home: The Shadow Stage. 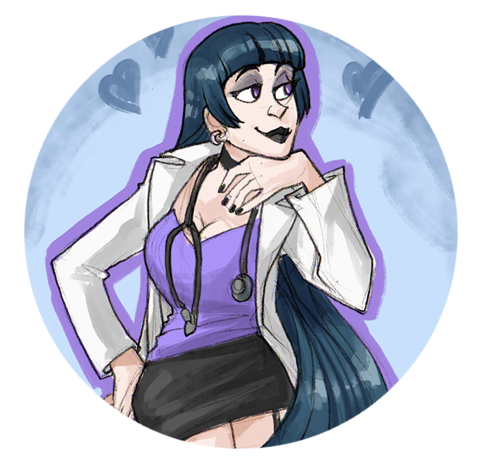 "I heard someone gave you a love letter. Let me see it!"

Rue is a calming, mature presence on the Campus, and is always willing to offer a shoulder to cry on or a joke to lighten tension. As sophisticated and elegant as she can be, she's just as likely to be silly and teasing. Her social skills have been polished since she was young, and she can always keep a conversation going if it needs it. But behind her smiling, flirty demeanor lies darker feelings she tends to keep to herself.

Consumed with regret over mistakes in her past, as well as lingering PTSD from a traumatic childhood, Rue clings to her "Cool Big Sister" mentor persona as a way to keep her heart protected. She'd much rather help someone else with their problems than talk about her own, and truly opens up only to a select few people who have earned her trust. She can come across as cold when she's angry, smothering her feelings to such an extent that she's more like a doll than a person -- a coping mechanism she developed as a child. 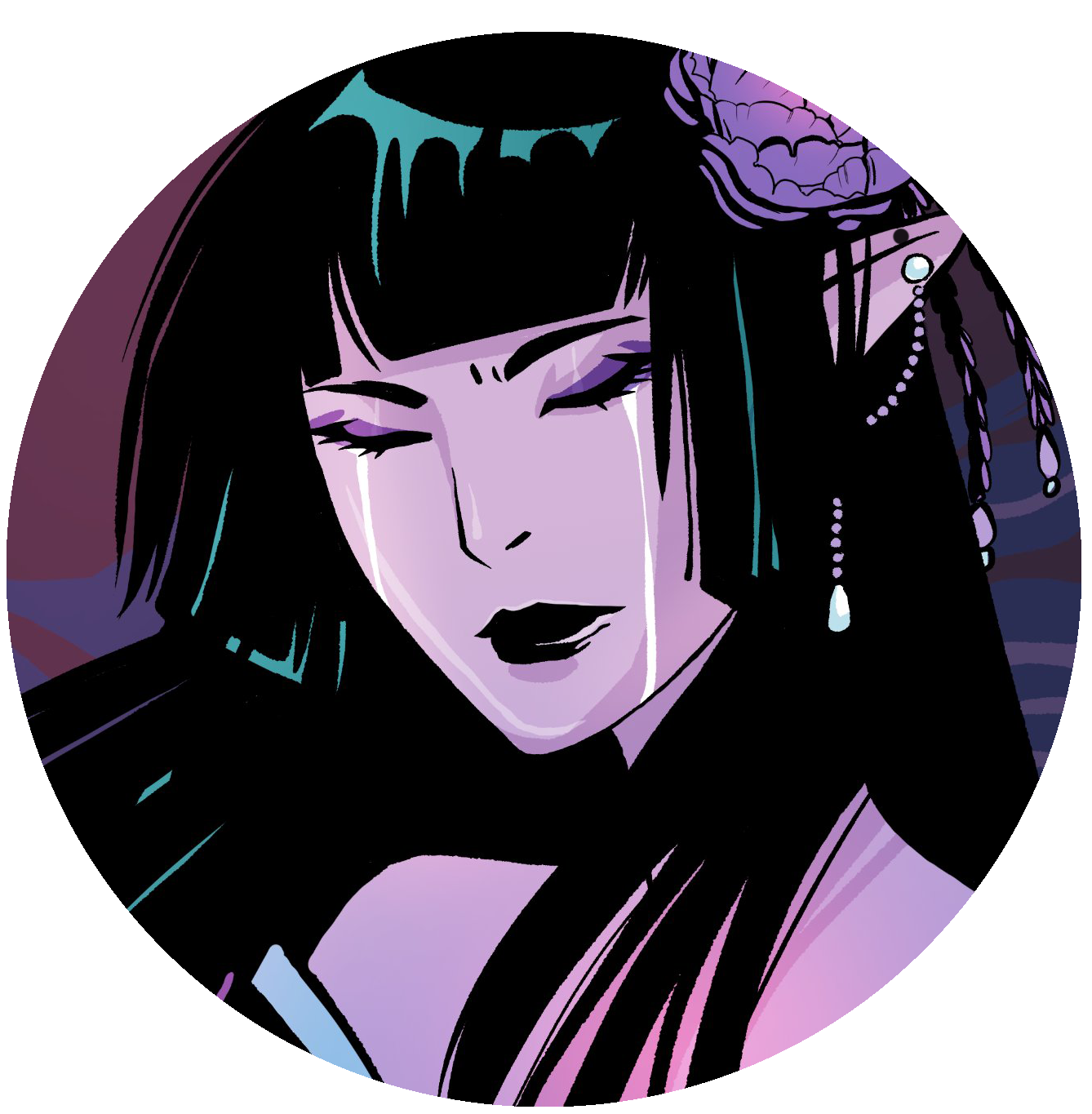 "If I have to play this Role, I'll play it to perfection."
Interests

"I love matchmaking, I love romance. But there's so many other things I wanted to do too. I love to create." 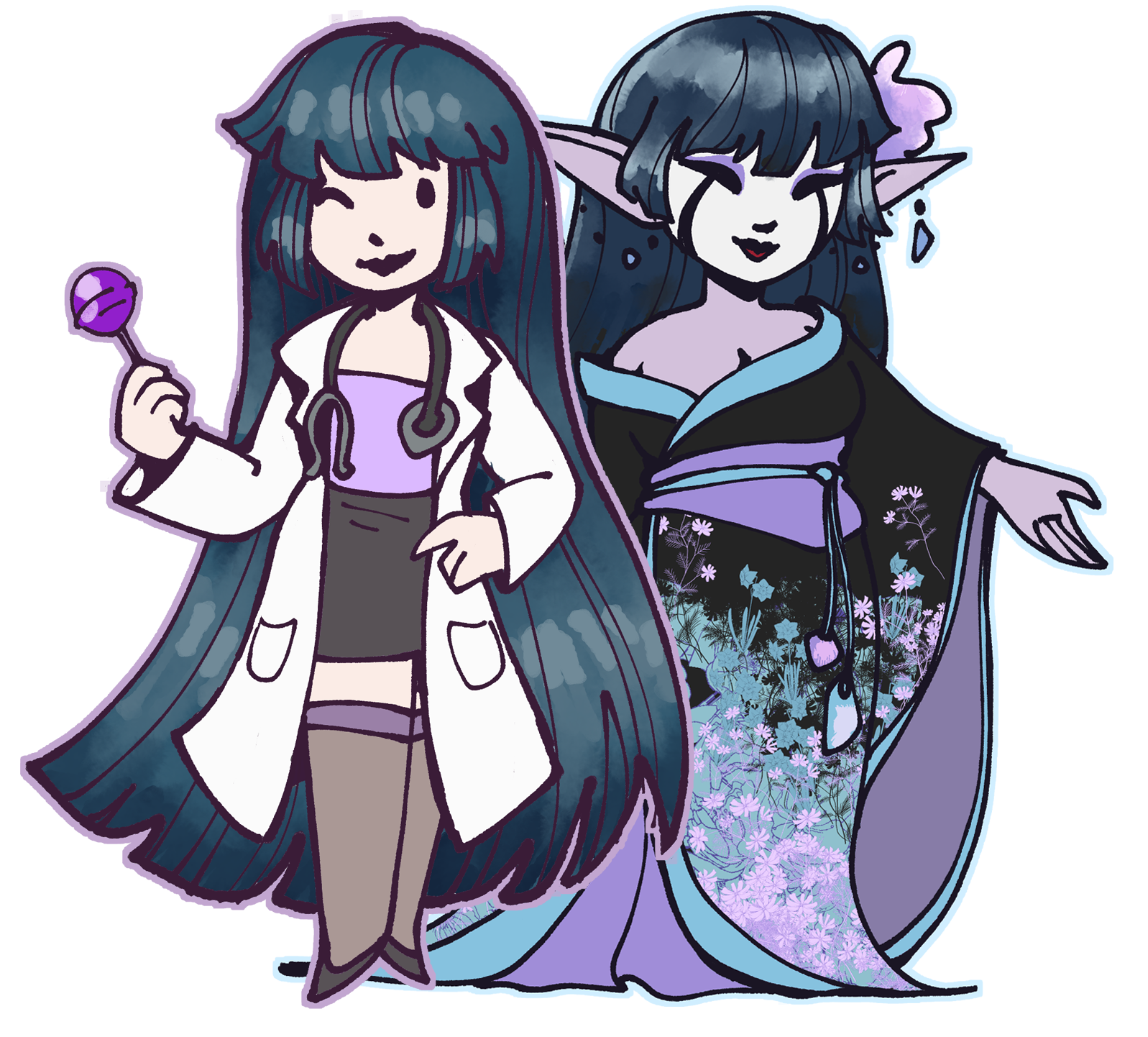 "Eh? My eyes looked strange? Just a trick of the light!"

As an accomplished Illusionist, Rue spends most of her time looking like a normal -- if somewhat striking -- human. She takes care of her appearance and grooming meticulously, always conscious of how she looks to others. Every shade of eye shadow, every hair style and garment, is done with forethought and care. She's not above using her beauty and sexiness to charm others. She has a preference for sexy and gothic fashion, which she most often wears under a white doctor's coat.

Her real form as a Thespian isn't actually too far off from her human appearance. Her nails are longer and stronger like claws, her skin is pale purple, she has vampiric fangs and glowing white eyes with black sclera, and long pointed ears. While this might seem startling to anyone who hasn't met a Thespian, her looks and coloring are actually fairly common in her home of the Shadow Stage. As a Thespian, she hides her face with a mask while in public.

Rue's pride is her hair, which she's grown all her life as is traditional for Matchmakers. It falls just below her knees and is thick and very straight, with blunt cut bangs and cheek-length sidelocks that frame her face. 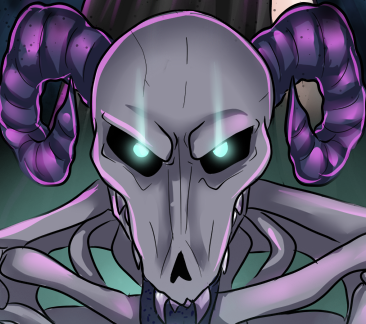 The first and original Kith of Rue's entourage, Thanatos considers himself her guardian, mentor and protector. He's known her since she was a child, teaching her how to hone her natural magic. Though he would never admit it, he considers his "mistress" like a daughter. She sees him as a father figure in return. 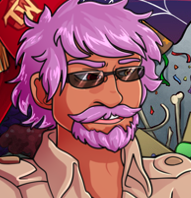 Rue met Shady in the Shadow Stage when he was known as The Slasher. They bonded over their shared love of romantic fiction and pairings, but had to part ways. They found each other again later in Hope, and started their friendship up once more. They began dating in February of 2020.

Raspberry is a student of Hope, often finding her way into Rue's office for a lollipop and to blow off studying or classes. Rue is very fond of her, and considers her an unofficial little sister to guide and protect. 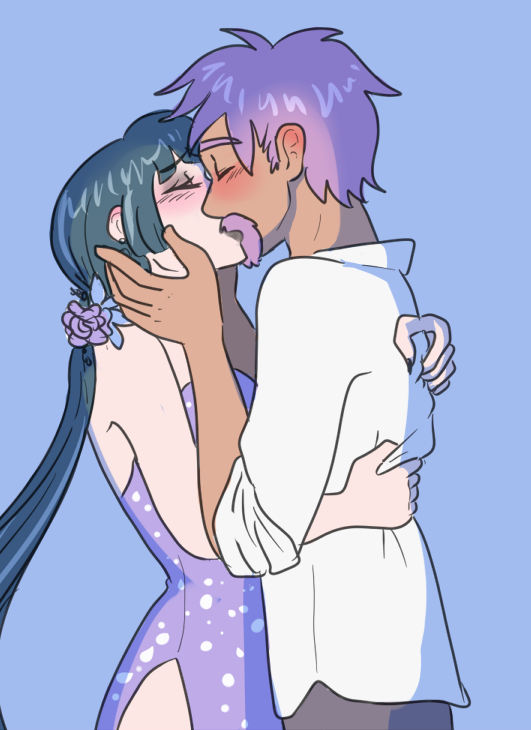 Everyone born in The Shadow Stage is assigned a Role, a path to walk for the rest of your life. Coming from a wealthy, powerful family, it was expected that when her mother, The Black Swan, got pregnant, that her child would naturally become yet another iconic and pivotal Role. Alas, Rue was assigned the secondary role of The Matchmaker just a few months after she was born. As a supportive Role, The Matchmaker helps behind the scenes with directing love scenes and writing romance dialogue, as well as reading love fortune cards for the Stage in general. Though certainly a respectable Role, Rue's family and especially her mother were disgusted, and that unfortunately paved the way for years of abuse, both physical and mental, from family, tutors and servants, all under the excuse of "training" her to be the very best Matchmaker the Stage had ever seen.

The end result was a young lady who was educated but sheltered, desperate to please and desperately lonely. Having not even been allowed a normal child's playtime and friendships, Rue was withdrawn and solitary, unintentionally adding to her mystique. Her Role became her whole world, a need to prove herself to her cold and cruel family driving her to the point of exhaustion. When she was old enough to officially take on the mask of the Matchmaker and live off the family estate, she was determined to walk the path laid out for her to perfection. But then she fell in love.

The Flower Girl was a sweet, friendly young woman who came to The Matchmaker's hut for advice about a boy she liked. Rue immediately developed a crush on her, and though her education had been filled with romance and sexuality, this was the first time she'd ever felt this way. Uncertain and confused, she helped the girl out in repeated meetings, trying and failing not to be charmed. One night, after Rue had comforted her doubts, The Flower Girl embraced her, giving her what was the first affectionate embrace in her entire life. After that, she broke a cardinal rule: she read her own fortune. The cards were cruel, laying out a terrible fate of heartache and despair should she try to pursue her feelings, and since Rue had been raised never to question or fight back against fate, she buried her feelings without acting on them. The Flower Girl joined with The Stable Boy and The Matchmaker watched at the sidelines, where she belonged. She focused even more on her work, hollow inside but determined. Never again would anyone or anything tempt her from her path.

But like seemingly everyone else, Rue's life was rocked by The Damsel. A bold, fearless and beautiful young woman, The Damsel seemed to Rue to effortlessly have everything she never could -- a loving family, friends, a star role, freedom. As The Matchmaker was often called in to advise and aid scenes between The Damsel and The White Knight, Rue was secretly tortured by her envy to the point of irrational hatred. So even though she saw the warning signs of The Narrator's displeasure over the blooming feelings between The Damsel and The White Knight, she pretended not to see and did nothing. The guilt and horror after what happened to the two lovers haunts her still, even after The Narrator was defeated.

The Narrator's defeat brought hope, however. With the world opening up around her and her corrupt family disappearing into the shadows, Rue finally had a choice she could make on her own. Inspired by The Slasher to leave her Role behind entirely and see what a new world had to offer her, she and her kith Thanatos braved the Tatters and made a new life in Hope University. Imagine her surprise when she realized who Shady Character, the strange and mysterious man selling illicit goods in alley ways, truly was... 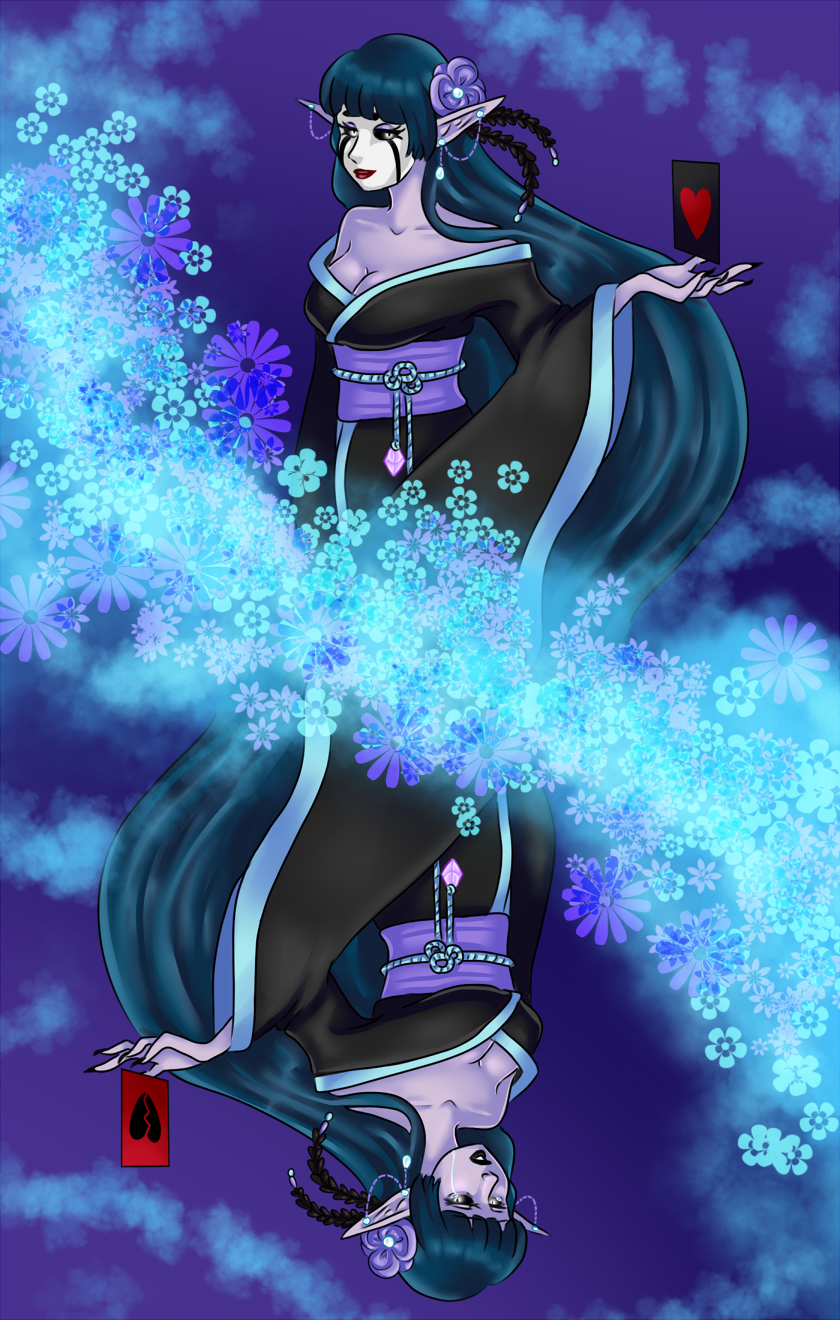 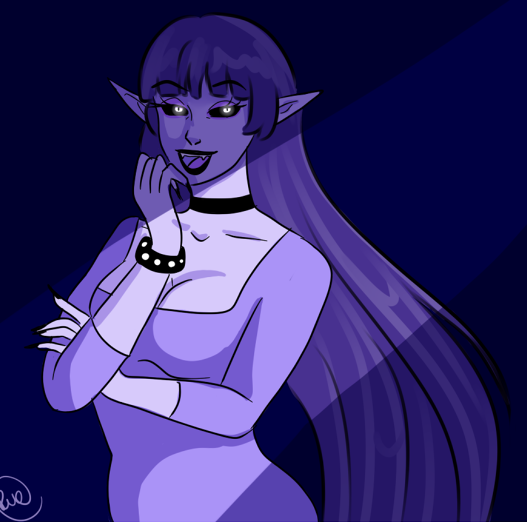 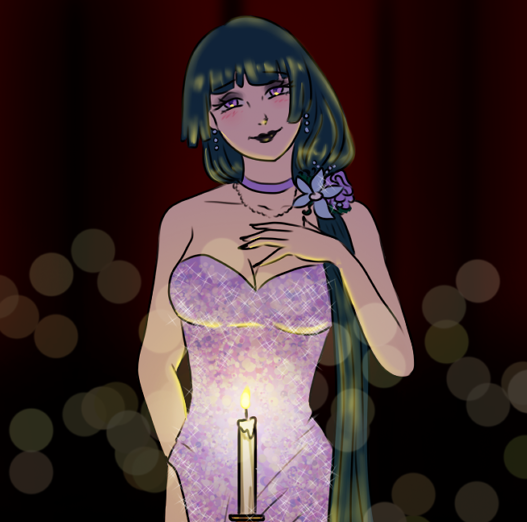 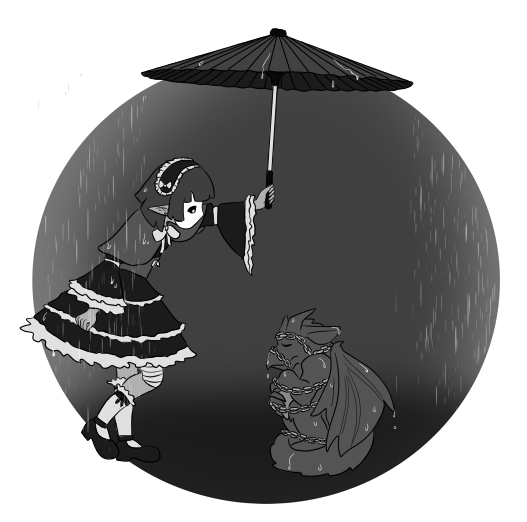 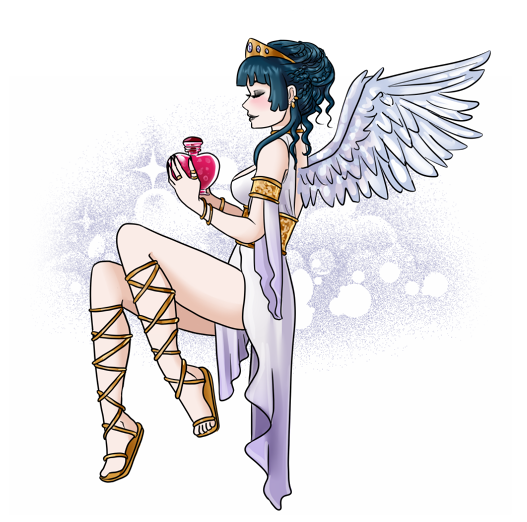 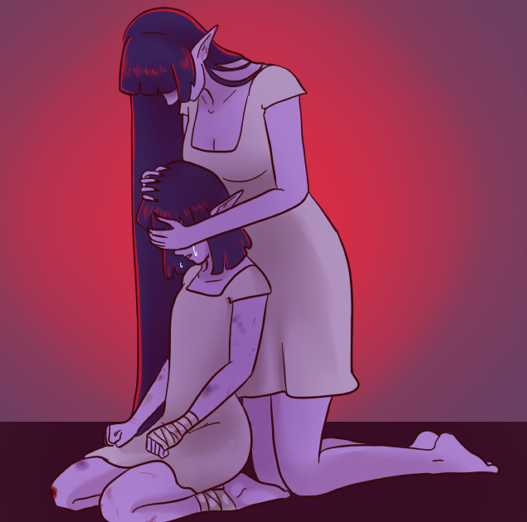 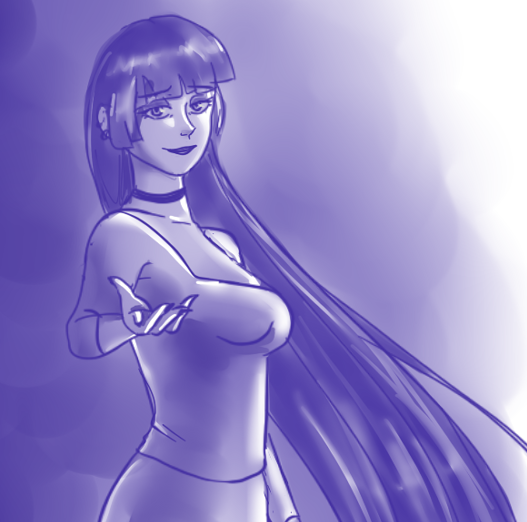