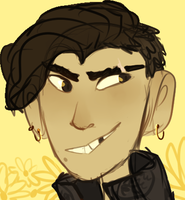 Honest, Positive, Daring, Mischievous, Impatient, Fiery
Jinghua is a fiery, almost explosive child, but she also has a certain charm to her that no one is able to resist. To most people, she acts friendly, like a little clingy bubble of sunshine. But if someone somehow manages to anger her... they're not going to be having a good time for the next couple of days. Jinghua gets bored easily, and always wants to be doing something, she can get a bit whiny if no one wants to do anything with her. However, despite her childlike demeanor, even from a young age, Jinghua comprehends much more than people give her credit for. Although she does like to make new friends, she isn't naive, and is a very good judge of character. Once she gets attached to someone though, she isn't ever letting go.

Jinghua was raised in a large purely T3 family in China. She has many siblings, but she is one of the youngest ones. Childhood for Jinghua was relativly uneventful, her parents bought her whatever she pleased and she had more than enough food and clothes. The Aliens had already been around nearly 10 years before Jinghua was born, so their presance was as normal as seeing a bird out the window. However this calm lifestyle for jinghua changed when she turned 6 and her ability manifested.

Ji grew up seeing all of her siblings and relatives who had really cool abilities, so was beyond excited for when her ability finally manifested. But Jinghua was unlike her other siblings, as she was T2 and not T3. It was rare for a T2 or T1 to be born into a family of T3s, but not unheared of.

While normally this wasn't much of a problem, it was now considering that an alien called Arthagos Ixas had control over much of China and almost all of eastern Russia, since 1945. Arthagos Ixas III had made a new law recently forcing everyone in terroritories she controlled to register as either T1, T2, or T3. Other laws she had enforced were starting to make it harder to be T1 or T2 and function in society. Jinghua's family started to see other families and friends they'd known to be T1 or T2 dissapear often without clear explanation.

Ji's parents decided it was unsafe for her to remain in the country. Su, Jinghua's sister who had always been close to Jinghua, suggested leaving the country with her for a time until things in China became safe again, or Ixas was put down. (which had to happen, sooner rather than later, right?)

And so they both fled the country, winding up in the Zubanzi Empire, and alien controlled area on the coast of Australia. To Jinghua, who was only 7, it just seemed like a really cool feildtrip. It took a bit for her to realize that she wouldn't be going back home or seeing the rest of her family for a long while.

Eventually the sisters found an Alien called Shetra Ka'ris who was looking for a body gaurd. Su began working for Shetra in return for housing on Shetra's ship, and a relativly fair pay. Although Shetra only wanted Su, they reluctantly accepted dealing with Jinghua in return for Su's services. Jinghua, who was of course much to young to do anything for Shetra, mostly just hung around the ship and pestered Shetra. Shetra didn't know how to deal with children, and thus treated Jinghua how they would treat anyone else, telling Jinghua about their buisness, what Su does for shetra, and over all the doings of the underground shady world of human and alien buisness. Of course, Jinghua was always the one who asked, but Shetra never held back with their stories.

As time went by, Jinghua began to feel guilty about Su doing all the work, and Su who had dropped everything in her life to make sure Jinghua was safe. Jinghua wanted to pull her own weight in some way, and after argueing with both Shetra and Su, she managed to convince them to allow her to have a job. Since Jinghua's ability was teleportation, she worked as a transporter of drugs, or other items, for Shetra. She also trained herself to fight with knives and just fight in general with her ability behind both of their backs.

|| Songs That Remind Me of Jinghua for Some Reason ||

I Found a Way by Drake Bell