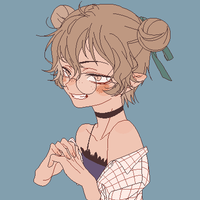 In human form, Tanzi is androgynous and slender, mostly flat-chested and only slightly curvy. The only physical features that really distinguish them from a normal human are their roughly 2' long rat-like tail and their pointy ears, as well as their rat teeth. She is short, about 4', with tanned skin, a smattering of freckles on her cheeks, and a tendency to flush easily. Tanzi has pinkish eyes and sandy brown hair usually done up in twin buns. They are almost always wearing glasses, and might look mousy if it weren't for their mischievous grin.

Tanzi's style is mostly short slinky sleeveless party dresses with some sort of light coat over the top depending on the weather. They also like ribbons, bows, and chokers, but not bracelets so much. Because of her colourblindness, she usually prefers shades of purple and blue. She also likes solid colours or plaid. Tanzi hates wearing anything on her feet, so they've gotten fairly calloused and are generally dirty from walking, though she cleans them as often as possible.

In her natural rat form, Tanzi is larger than a normal rat, 2' long and weighing about 2 lbs as well. They are somewhat mutated, bulky, with orange warts and shades of pink and purple mixed in to their mostly brown fur. Tanzi generally doesn't wear clothes in this form. For the most part, she can't speak as a rat, but she knows ASL and can write.

Curious, nosy, and a bit of an eavesdropper, Tanzi is still very much a rat by nature. She's nocturnal and quite active while awake, seemingly always on the go whether at work or play. Though they're mildly agoraphobic and prefer enclosed spaces, they love to explore, climbing, swimming, and generally getting into new places. A scavenger and hoarder, Tanzi likes collecting random shiny things, but she also likes repurposing them into clever DIY type projects and lifehacks. She also enjoys playfighting or wrestling, just for fun. If actually threatened, they're more likely to freeze or flee than fight.

Though Tanzi is pleasant with strangers, she's also territorial, seeing people mostly as distant acquaintances or close friends and family with not much in between. It takes a lot of time and patience to befriend her, but she adores the select few who do make the effort, and is physically affectionate, cuddly, with family and friends, though not romantically inclined. Tanzi is not asexual, unfortunately they find the majority of humanoids unattractive.

Human Shifting - Outside of the full moon can shift between human and rat forms at will. Can only stay in human form an hour at a time, but only needs a few minutes rest between shifts. Reverts to rat when sleeping or unconscious.

Tough Glasses - Normal prescription glasses that shift with her. Also enchanted to be scratch-proof (against anything short of a diamond) and unbreakable (up to 500 lbs of force).

Rat physiology - Rootless teeth in both forms, has to gnaw to keep them short. Her bite is as strong as a normal rat's bite, proportional to size. Nocturnal. Affected by rat diseases rather than human diseases.

Enhanced Senses - Sensitive hearing, can hear the ultrasonic pitches of and can communicate with rats, but loud or sudden noises hurt her ears and disorient her. Also has a rat's sense of smell. In both forms.

Enhanced Physique - Can lift and carry roughly 3x times her body weight (~150 lbs in human form). An excellent burrower, swimmer and climber in both forms, in human fom comparable to a top athlete.

Enhanced healing - Heals from non-life-threatening wounds about 3x as fast as a normal human. Also recovers from illness and poison in about half the time it would usually take. Extended lifespan of roughly 40 years.

Silver - Silver burns on contact and heals slowly. Silver ingested or injected into their bloodstream will make them severely ill and could be fatal.

Full Moon - Must shift to human on nights of the full moon. Becomes feral and carnivorous. Really more of a danger to herself than others.

Poor vision - Extremely near-sighted. Without glasses, she wouldn't be able to see anything more than a few inches from her face except blurs. Also red-green colourblind, but can see extra shades of blue.

Tanzi's birth parents were fairly normal, extensively experimented on, lab rats in a secret lab that had access to some supernatural dna for their tests. Though her parents did show some increased intelligence, it was Tanzi's litter that really saw a breakthrough in that area, possibly because the werewolf dna was added before birth. These rats weren't exactly veil-beaking at the time the lab was shut down, roughly two weeks after their birth, but another more dangerous experiment escaping had alerted the scouts.

The scouts originally took in the rats for observation, not realizing just how different they were until the full moon when Tanzi transformed into a human toddler. After this first shift, she aged mentally/physically at the same rate as a human. She was raised as an orphan for a couple more years, attending preschool and being taught to control her shifting, though she wasn't able to spend much time in human form until her teens. After those couple of years, she was adopted by the Prices. Though she didn't fit right in, she wasn't rebellious either, mostly keeping to herself until she warmed up to them. And then the relationship was a very close one, especially with her mothers who she looked up to as leaders of the family.

Tanzi has been on the island roughly 20 years. Once they graduated high school, they went to the college to study sound mixing because they liked the idea of getting up close to things without actually being on camera themselves. They have worked their way up the ladder at a small news station and are quite happy with their current position. Tanzi moved out reluctantly, but got an apartment with a friend and visits home as often as possible so she won't get lonely.

Resources: Lives in a small apartment with a roommate. Gets a decent income from job.