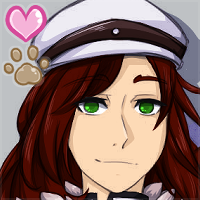 Personality: Kind, polite, restricts self for appearances, can be rude if disrespected

Julien is a high noble, he is warm and kind but is always concerned about his appearance. His hair is his prized possession BESIDES his family.. He is married to Tiddle Valienni and has a daughter named Juliet Valienni.

Sometimes they have relations with Satoshi Watanabe. Julien has a long history with the feline.