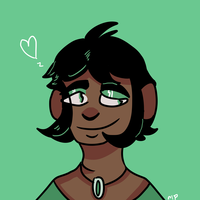 Sook is a rather cocky and hedonist woman who likes to hunt and start fights, however she is very loyal to the masters, and is rumored to be romantically involved with the master called "Mr. Stones".

In another timeline perhaps she was a Zee Captain, on the search for immortality.