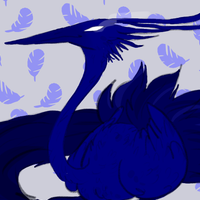 she considers herself to be married to several hot anime babes

Anime, shoujo as a genre, shipping, sweets, bread, getting in some quality petting time, getting scratched behind the horns, J-Pop, video games (she can't play them but she reads/watches a lot of LPs!), cute accessories, listening to music, fluffy beds, memes, staying up late, snacking, cute animal videos, karaoke, fish (especially sushi).

Egregiously fanservice-oriented anime, love triangles, when things could be resolved if people just talked to each other, cliffhangers, how hard it is to type/write, how hard it is to draw, getting her beak stuck in her snack containers, embarassing herself in public, internet trolls, real life violence, going too long without someone petting her or giving her treats, when her headphone cords get all tangled because it's SO much harder to deal with when all you have is a beak, stale bread, when people expect her to just eat treats off of the floor (she's a classy lady, thank you very much!!), when her favorite characters die, fanfiction that's totally out of character.

At first glance, Phoebe is gorgeous and imposing. She's intimidatingly tall, is surrounded by a mysterious air, has an elegant silhouette, and is covered in beautiful feathers... and then she trips over something and squawks loudly before getting up and running away very fast, at which point you realize that not only is this bird sapient, she's a big clumsy dork!!

Phoebe is kind of a klutz: she always ends up in the wrong place at the wrong time, trips over air every other step, and bumps into everything near her. She tries to explain herself, but unfortunately she's nonverbal and can only communicate through apologetic squawks, tweets, and trills - which most people don't understand. It doesn't help that she has social anxiety, so even if she could speak she'd just stare into the distance blankly with spaghetti flowing out of her beak. She just wants to make friends, but she's very awkward and constantly stumbles over her words. And also things on the floor. Just... everything.

Her comfort zone is in her dorm room, crying about anime while struggling to type about it with her beak (which is full of either popcorn or pocky). She gets really excited when she finds out other people are big dorks like her and will marathon anything with them. Bonus points if they also want to talk about their headcanons and ships with her!!

If you could read her mind or otherwise translate her bird noises, it'd be full of internet slang. She's basically a teenage girl except an immortal demon bird. Same diff.

Phoebe was born and raised as a pet to a powerful Demon Lord, constantly pampered and provided with every possible luxury. She was a rare and exotic species and as such was used as a talking point and as a living decoration. She was usually displayed prominently by the Demon Lord's side, where she got in some quality petting time from lots of exciting people - and, more importantly, got free snacks!!!! It's astounding how many people enjoyed watching her eat bread. Hell bread.

Unbeknownst to the Demon Lord or any of their servants or companions, Phoebe was not only a bird, but a demon in her own right! As a lust demon, she became progressively stronger the more she was visited and excitedly fed bread by powerful magical Hell strangers. Over time she grew larger and became more intelligent, and eventually her brain became just advanced as a human's. This didn't change her lifestyle much, and in fact only drew more attention to her as she began actively watching TV, trying to use technological devices, and poorly drawing self-inserts for her favorite anime and video games with her food. This in turn only aided her in absorbing more energy, though she really didn't know how to use it and wouldn't have seen any reason to anyway.

One day the Demon Lord was shocked to find that Phoebe - not the Demon Lord nor any of the other demons in the area - received an invitation to Hell College. Though Phoebe enjoyed her luxurious lifestyle and fame, she was eager for a little change of pace! It would be just like in one of her Japanese animes!!! A real life heart-pounding school adventure...!!! She couldn't wait!

Of course, as it turns out, attending Hell College is a bit more daunting for her than she anticipated... How do you talk to people? How do you make friends? How do you hold a pencil? What are proper studying habits? It's all so confusing! She's spent her life being treated like an entertaining pet and now she's being looked at like a real person... but she won't falter! A true heroine never gives up! Even if she wakes up late and trips over everything, she'll diligently take her classes with toast in her beak and become a real and true Demon Lord!!!

Though her stature is much like ostriches and related animals, Phoebe can fly! For pretty long distances, too! She isn't affected by temperature or changes in air pressure and - despite her clumsiness on land - can remain stable in the sky in the face of impressive winds. Though she's not large enough to hold that many people, she's strong enough to hold just about any one person for pretty long distances on either land or in the air!

As mentioned, Phoebe is a lust demon. Contrary to popular belief, lust demons don't just get energy from sexual contact! Phoebe only knows what sex is because of anime, anyway. Instead, Phoebe just gets soul energy from close contact with people and has harvested a surprising amount of power throughout the years thanks to being the esteemed pet of a very social person with loads of powerful and magical friends. This aids in her (short-lived) imposing facade, as even the lowliest of demons can feel a strong vibe from her.

Something she's just now discovering at Hell College is that she has the ability to both defy gravity and manipulate it to some extent, able to cause things to levitate or shift gravity into reverse. Of course, most of the time she activates her powers accidentally, but that's only fitting for a budding anime protagonist! What other powers will she unlock?? Find out next episode!!