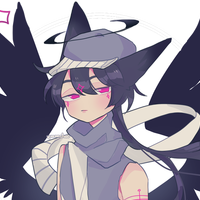 Tranquility
N A T S U

Natsu is the middle child of three, and the quietest of the bunch. He isn't introverted really, he enjoys the company of others, but he enjoys their presence more when they don't try to involve him directly. Listening to people speak and go about their lives is a pleasant experience for him, and he doesn't need constant attention to feel included. He prefers to write and draw his thoughts rather than speak, and his voice is incredibly soft and almost nonexistent due to this.

His hobbies range from drawing, playing DnD, and occasional writing here and there. Natsu also heavily indulges in coffee and tea and has a sweet tooth he satisfies with pastries. He also makes handcrafted custom dice for himself and his friends, with the occasional sale here and there. Natsu collects candles and other dice as well, though most of his candles are crafted by his older brother.

Natsu himself is very calm and easy-going but can grow to dislike certain traits or things. He's not a fan over egotistical people, and absolutely can't stand those who put others down.  He's not a fan of swimming either, as his wings get heavy and annoying when wet, and he doesn't like being in direct sunlight or in hot weather for too long. He's also extremely superstitious, and won't go near anything he's convinced is cursed or possessed by another entity.

Natsu's quirk allows him to effect his four major attributes positively or negatively based on by rolling a set of dice. He attunes his soul to one set of dice at a time - 2 D20s - along with a coin. He can increase the following attributes: Durability, Intellect, Speed, and Strength.

Natsu gets along fairly well with his older brother, though they clash frequently due to differing ethics. While Kichirou feels no guilt in taking advantage of others, Natsu strives to help others in any way he can. He respects his brother's life choices, but will never agree with how he goes about achieving his goals.