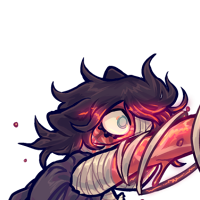 She's the flawed outcome of unstable necromancy, brought back to life by a death obsessed organization (cult) that wants to replace all of the living with immortal undead. Perfect resurrection is no easy task, however, and their attempts have all ended in mostly failure.
Puppet is one of their more recent attempts at resurrection, however she's still deemed a failure since her body is highly unstable and it's uncertain exactly how much she can process.
She's never spoken a word, but appears to understand the orders that she's told. despite her apparent intelligence, she seems to have no recollection of her 'living' life.
she's missing almost all of her skin, and is primarily held together by the dark magic embedded in the gauze that encases her body. The one thing that she seems most capable of is fast and relentless combat, in which she pushes her undead body past its limits.
Puppet has spent her entire resurrected life being tossed around by the organization; they use her to finish 'dirty jobs' so that they can keep their hands clean. she continues to follow their orders because they are the only thing that she's ever known.

her current mission is to hunt down and capture cookie, the rumored 'perfect resurrection'.