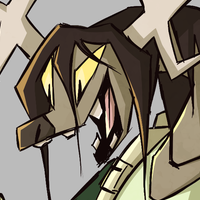 We thought she was a wendigo at first because of the whole... uh... forest monster thing. But based on her lack of interest in humans and her muscular build we're gonna ditch that theory all together. Diet consists of bones, deer, fish and carcasses mostly but there have been reports of her raiding camps for peoples food and fresh kill. Seems to use those claws a lot more when it comes to hunting based off all the footage we've found. Crafty gal too we've caught her with some homemade fishing rods, traps, and plenty of re purposed stuff she stole

There's a few deercam shots we got of her. Mostly just her making weird faces, flipping them upside-down, trying to open it that sort-of stuff. So, she's definitely not camera shy for one thing (unlike the other guys. Ugh! Bigfoot i'll get you one day! Does she know him? Have to catch her and ask)