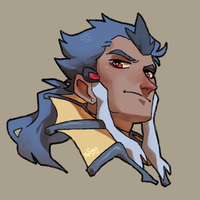 Leviathan is a Mega Gyarados gijinka. He was also once a little Magikarp!

When he was a Magikarp he had a cowardly heart (since he was super weak it makes sense) but always put on a brave front and never ran away from any challenge as he wanted to get stronger. After he evolved he chilled out considerably.

Levi is a bassist in a water type band called Aqua Jet. He plays in a local seaside restaurant that is owned by Airi's family. He can look a little too serious but he is good natured. He has a younger half-sister he is protective over.