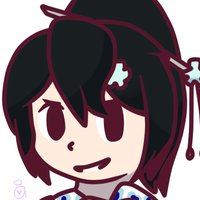 He's a raven who wished to be human ever since he was a hatchling, and after being killed by a hunter, got it granted...sorta... He became sort of a half human, half avian being. If being completely specific, his species was and is partly that of a Common Raven (Corvus corax). His age is unknown (he doesn't even really know) but he usually claims he's in his late teens based on what people have said about him.

He still has his wings, but he keeps them hidden most of the time. He enjoys traveling and tends to travel to Asian countries often as they interest him the most.

Personality wise, Gau is clever and somewhat of a trickster at times when he needs to be. He enjoys making money and usually does it legally. He doesn't have many friends  due to him traveling so much, but is generally friendly.

His stand, Blackbird, turns coins into little birds who's power is determined by the worth of the coin.

Gau is smart enough to evade the law or anyone if needed, but not enough to realize that the toy in the kinder egg isn't food and choke on it. And yes, he's done it. Three times.

Gau can talk to birds, and he can mimic others' voices almost perfectly