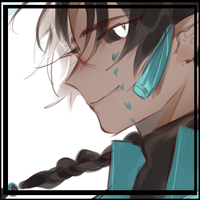 One of the 7 Wings of Hell: Wrath

A serious soldier and a respected general but an older brother figure to all. He's full of energy and confidence- an ironically moral demon that enforces demonic laws to maintain balance.

Notes for interactions w Niklos:
- Kisses Nik's hand whenever Raph makes a promise to him
- Constantly being a cheesy love struck to Nik
- Turns his face away when he smiles too much at Nik being cute

(Most if not all interactions with Niklos involve his younger form BUT if you fine the other more aesthetic, go feral, do that one lmao)

Highlevel demon that has been through too much. His raw destructive power and strength once hailed him as Hell's Finest Fighter. Rivaling him was only the Angel Niklos who he developed an intimate relationship with. More than friendship or brotherhood yet not haven yet crossed the path to lovers, it was undeniable that they were in love. Their time spent together was brief but treasured and when the Holy War between heaven and hell broke out, God found their relationship inappropriate and forced a layer of brainwashed loyalty over Niklos.

To test the brainwashing, God forced Niklos to choose between him or Raphael. Only the night before, Raphael secretly met with Niklos and begged for him to Fall into hell for him. "I'll catch you. You know that, I always do" he pleaded, unwilling to fight to the death against Niklos. Niklos parted ways with him promising to think about it, however he was soon placed in the position of stopping Raphael from harming God- essentially forcing him to choose between the one he serves and the one he loved. Choosing Raphael.. Niklos began to lower his weapon- only for the brainwashing to then kick in and force him to do otherwise.

Raphael: "Niklos, why don't you choose me?"

Niklos: "Why don't you choose Him?"

Current era after the war: the two have not talked in centuries. Raphael has fallen into a deep depression that his demonic siblings have trouble comforting or handling while Niklos continues to live under the strong brainwashing of God. Hollow and unaable to think for himself.

Second War: Raphael taking a final stand with his siblings lead the second war against the Heavens that have become too unstable under God's reign. TLDR, Raph breaks Nik's break washing when Nik kills him and he holds Raph's cold dead body finally.

Raph: "Say I love you instead"