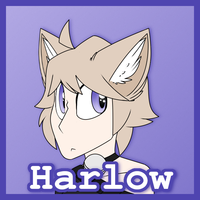 A shy girl who works at a research facility

Harlow is very shy and reserved. She prefers to be left alone, and becomes stressed easily in social situations. She also doesn’t connect with others easily. Even if she has a lot in common with someone, it’s hard for her to start a friendship. That being said, she’s generally a kind and happy person. Harlow is just fine doing her own thing.

This could be super powers, special talents, job, etc

Harlow’s parents were those of vastly different gene purities. In their culture, this is an extremely rare occurrence, and is not looked upon kindly. Her parents knew this, but decided to have a child anyway.

Almost immediately after Harlow was born her parents felt regret. How could they be so selfish? Their child would most definitely be shunned by society. All the opportunities she would normally have would be gone, because her genes would be seen as “tainted”. While Harlow’s genes were relatively pure, she’d still be treated the same way as an impure animal. Her parents knew she didn’t deserve that life just because of their decisions.

After many weeks of thinking it over her parents decided to put Harlow up for adoption. They didn’t want to, but they knew this would give her a much better chance at life. If she was adopted, no one would care about her parents purity, only her own. There was one problem with this plan, however. A problem they didn’t take into account before giving her up. The people who worked at the orphanage WOULD take her parent’s purity into account.

Growing up, Harlow was ostracized by the workers. They never treated her fairly, purley because of who her parents were. Harlow always got the smallest portions, the worst clothing, the dirtiest room. The other kids at the orphanage picked up on this, and started to pick on her as well.

Harlow hated this. She didn’t understand why everyone hated her. All she knew was that it had something to do with her parents. This made her resent them, despite not knowing anything about them. If they did something so horrible that she would be treated this poorly, they must have been terrible people.

The torment only got worse as time went on. Eventually Harlow found out that if she just did exactly what people told her to do, and did it really well, they wouldn’t be as hard on her. How can you be mad at the person who cleans your room for you every day, just because you asked? Being compliant made people treat Harlow less as a “terrible impure monster” and more as a housecleaner. Sure, they still didn’t treat her very kindly, but at least it was better than before.

Because of the bad stigma surrounding Harlow, she never got adopted. The workers would always tell potential adopters about her parents almost immediately after meeting her, causing them to show the same disgust as everyone else. She was stuck at the orphanage until she was considered old enough to live on her own.

The years of torment completely wrecked Harlow’s self esteem. She felt like the only thing she could do right was follow orders. Leaving the orphanage was extremely difficult. What would she do? What could she do? Who would want to hire such a worthless being?

Much to Harlow’s surprise, the outside world didn’t treat her nearly as bad as the people in the orphanage did. No one seemed to care about who her parents were. They didn’t even know. All they saw was a relatively pure Oomay. Still, she didn’t feel like anyone would hire her for a “nice” job.

After months of looking for a job she was “worthy” of, she eventually found something. It was at a research center. Harlow didn’t exactly know what they were researching, but it didn’t matter. She was just a janitor there. The perfect job for her! All she had to do was clean or fix whatever people told her to.

Harlow worked at the facility for a few years. As she worked there, she picked up on some of the things that were researched. They mostly worked on genetics and how genes worked. At first Harlow didn’t care for it, considering how people treated her solely based on her own genetics, but as time went on it became more and more interesting. It was fascinating how these things worked, especially considering how unpredictable Oomay genes can be.

One of the researchers picked up on Harlow’s interest. He noticed how she would always pay attention to the lectures while cleaning. He also noticed how well Harlow could remember the information. She’d sometimes bring up seemingly random or seemingly insignificant details in conversation. Things most people would forget completely. Intrigued, he offered Harlow a job as a researcher. She accepted.

Now Harlow works as a junior researcher. She mostly just gets things for people, but she doesn’t mind. She likes being told what to do. While it can be hard work at times, she loves what she does, and can’t wait to see what the future brings.

Clothing: Comfy, casual. Her clothes almost always have something cat related on them. The bell collar she wears can be swapped for any other collar, but I prefer the bell

I just… Love kemonomimis. So I caved and made one for myself