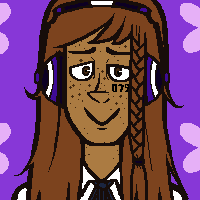 none really, but if you want to give her a more traditional name you can call her "Hyacinth Delta"

adorable and fun-loving, with a huge interest in robots and computers

clone body leaves much to be desired, bottles up her stress, finds it hard to say no

▶Created in a long-running, secret human experimentation facility with a focus on clones, Hyacinth is the fourth to bear the name (hence her designation of delta, δ) and bioengineered to be particularly smart with machinery.  The facility got away with its deeds by being located on a remote, rural colony planet of mostly miners and farmers, hiding its projects from the villages nearby.  That is, until Hyacinth δ became sick of being cooped up in a cell, created a makeshift distress signal, and drew the attention of the Snow & Arrow crew. Human cloning and experimentation is very, very illegal, and after her rescue Hyacinth testified in a trial against her captors.

▶Needless to say, the facility was found guilty and the clones were given new jobs and lives.  As a reward for her bravery, Hyacinth was offered a position as an engineer for the Snow & Arrow crew, and she accepted without a second thought.  Since she grew up sheltered, this is her first real foray into the real world, and even though she has talent with machines, she's never had to practically apply her skills until now.  She's bound to mess up here and there, but she keeps on fighting with a smile.  But with clones having a predisposition toward poorer health, and being suddenly thrust into a galactic culture she doesn't fully understand, Hyacinth could be bottling up the stress that she's now feeling, not knowing how to deal with it.

▶She spends a lot of time talking to [perseus], the ship's AI.

▶Her favorite things are androids.  She’s tempted to start a blog about androids.  The title would be “musings of a transgender transhumanist.”

▶She’s never seen a hyacinth in person.  She really wants to, though.

▶She insists on keeping her bracelet from the facility, even though Azriel has said they could remove it or simply give it a hinge.

▶Her headphones are actually for noise cancellation when dealing with the ship’s equipment, but they also have a radio!