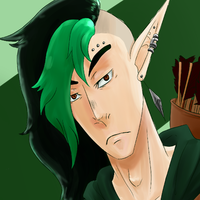 Generally moody and reserved, Zex likes to keep interaction to a minimum. He considers most of the decisions of the general adventuring populace to be asinine at best. His heavy lisp leads most to believe that he has a lesser intellect, this is the farthest from the truth. He dishes out insults to most anyone and everyone, without much bias. He has always felt the need to get the last word in. He holds himself to an even higher standard than he puts in his party members;  he puts in hour after hour into his studies and archery. He prides himself on his nearly perfect record. For those he is attached to he will rarely show it, except in irony. But he would do anything for them…. Well maybe anything, who knows with him?

One of his favorite pastimes is to sit around and people watch, mentaly insulting them all the while. He is very suspicious of new people as a general and doesnt not trust others unless that trust has been earned. then he is on a job and with others he doesn't know, Zex will rarely speak letting actions speak for him or else he will choose his words carefully to avoid giving his lisp away.

Zex was raised on the streets, his family was extremely poor and zex left at a young age so as not to burden them. And he hurt both them and himself in the process. He joined a small gang of petty thieves where he met his best friend a mythic elf named melli, They had fun and laughs and promised to travel the world together. He became one of the gang prominent hunters of rat and pigeon. Eventually the two raked together enough money with guests around town and working jobs outside of their normal dues for the gang to leave for good.

Zex left to see the world with Melli but somehow through one misfortune here one road there, he never managed to leave the country. He started to get frustrated as he travelled, the more he saw of the people and land he lived in the more corruption he saw.  After nearly a decade of good times and bad; an event happened. Zex refuses to talk about it to this day. But the results were scarring to his psyche nonetheless. He lost Melli, they were separated and he was injured. His bow hand mangled.

Over a few years of healing and training, Zex eventually was able to shoot again. But he never really formed any lasting connections with other adventurers, joining one group here another there. He grew very intolerant of stupidity. Maybe one day he'll meet a group that can command his loyalty and respect. Until then he just hires himself out to make a little money, drifting from place to place looking for any leads.

- annoying people
- talking too much
- too much stimuli
- long complex plans
- stupid people
- those who beat around the bush
- sugary foods
- getting drunk
- getting cut off
- those who make fun of his lisp
- pranksters
- those who rely on natural talent
- braggarts
- those who believe that they know others better than they do, people who think they deserve loyalty and respect without earning it.